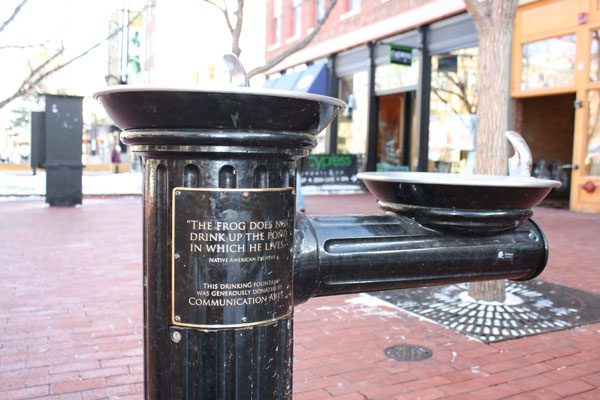 I spotted this terrific water fountain in downtown Boulder, Colorado on Pearl Street. It was donated by the Communication Arts department of University of Colorado. While it offers some great food for thought, I’ve delved deeper into the hydration of frogs. According to wiki.answers.com,

A characteristic of all amphibians is permeable skin. They do have the ability to absorb water through their skin. It is called cutaneous absorption. It is very uncommon to observe frogs drinking water orally. Their primary means of hydrating is by absorbing water, rather than drinking it. 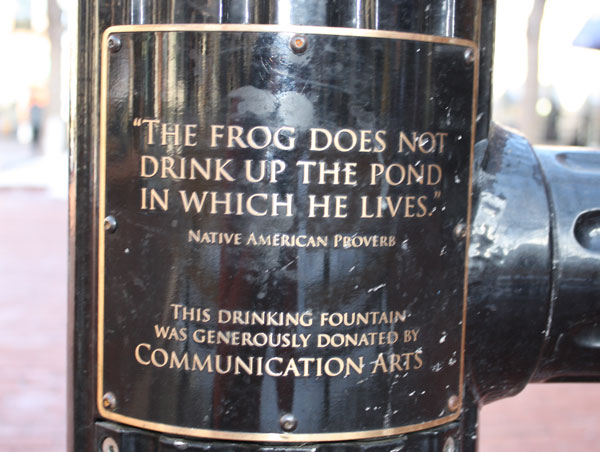 In a previous post, I declared that you’ll never have to call a bomb squad to detonate your tap. Now, it appears that might be false!

Apparently, if you live too close to natural gas your water can become flammable, as happened to a couple in Fort Lupton, Colorado whose home is within a half-mile of eight natural gas wells.

According to this story at blogs.discovermagazine.com,

Jesse and Amee Ellsworth say that one of these wells (no one knows which) has been contaminating their well for six months now, and that they can light their water on fire. Testing done in the basement, bathroom, and near the well has shown explosive levels of the gas. But only recently, they say, did the companies decide to take any action—and only then at the urging of the state’s oil and gas commission.

I just can’t get enough of this video from MSNBC! Just think, in the event of a boil order they’d be sittin’ pretty!