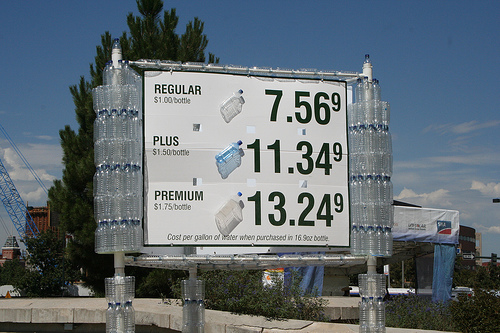 Seen at the Green Frontier Fest, held along with the Democratic National Convention in Denver: a clever visualization of the obnoxious cost of bottled water. I’ve no idea who’s behind it, but the photo is from Jeffrey Beall’s Flickr photostream. 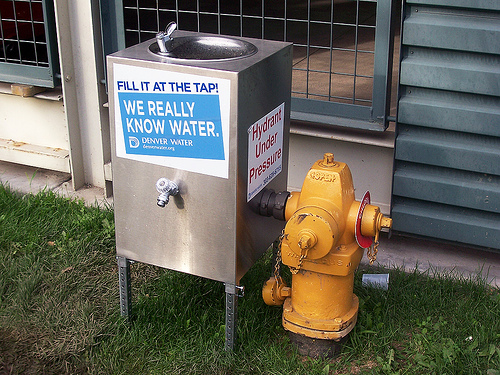 Another variation from Denver Water at the Democratic National Convention. From Brandon Hess on Flickr.

Primo brand bottled water is all over the press and the Democratic National Convention in Denver, as it’s the only brand (right now) that comes in the politically-correct biodegradable bottle. I’m not sure, though, why Denver Water’s DNC tap water twist hasn’t captured alot of media-love as well.  The Denver Post reports,

When Democratic National Convention delegates, protesters and gawkers are looking for a cool drink, Denver Water will have it.

The city’s water utility — combining the finest in beer-keg and dairy-milking technology — has built the Denver Water Trailer. The $42,000 trailer was to carry 200 gallons of cold — 42 degrees Fahrenheit — water at events from the media kickoff party Saturday at Elitch Gardens to Invesco Field at Mile High on the day of Barack Obama’s acceptance speech.

The water trailer also will appear at the Green Concert at Red Rocks Amphitheatre and Green Frontier Fest at the Denver Performing Arts Complex’s Sculpture Park.

The trailer is the brainchild of a group at Denver Water looking for a way to provide an “environmentally friendly” service at big outdoor events. “There are always lots and lots of plastic water bottles in the litter after a big concert,” said Terri Chavez, a Denver Water community-relations specialist. “So the idea was to reduce that.” 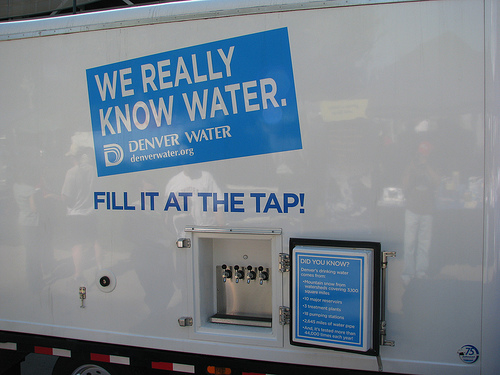 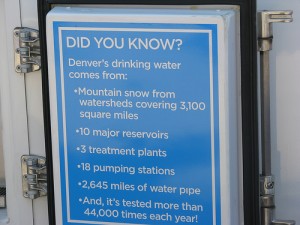 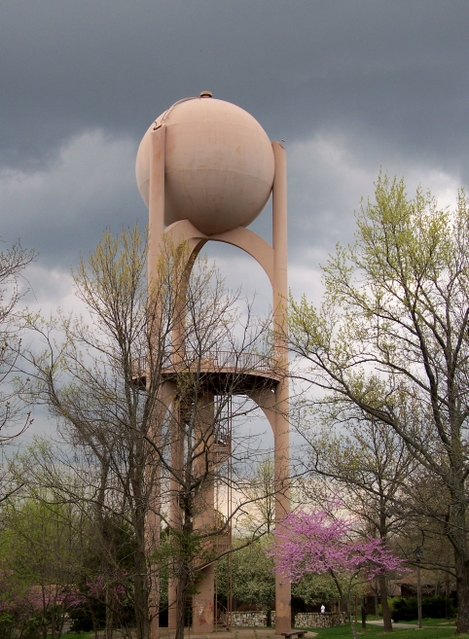 Although Tank, Spaz and Tiddy might not be welcomed, this water tower in the Giant City State Park, near Carbondale, Illinois averts temptation with a design meant to climb. Constructed in 1970, it’s 82 ft. high, holds 100,000 gallons and includes a 50 ft. observation deck for panoramic views of the park and beyond. I like the semi-sci-fi, sculptural look of it–maybe better suited for downtown Chicago than downstate. You can put this one in my backyard.

The lovely photo is from city-data.com by bambam203.

I’m sure a little summer fun is all they had in mind. Or maybe summer fun in their little minds. Four Manatee county, Florida teenagers went straight to jail for burglary and criminal mischief when they were nailed vandalizing this water tower. Melissa Jenkins, her brother “Spaz” Jenkins and his two friends, Frankie “Tank” Koonz and Jordan “Tiddy” Tidwell scaled the water tower to spray paint their names. Now, that’s smart! Sheriff’s deputies eventually arrived on the scene and arrested all four.

At 10:30 pm on a Friday night, they climbed a ladder and got to work, . Someone on the ground spotted the antics and called police. Photos from ABC7 mysuncoast.com. 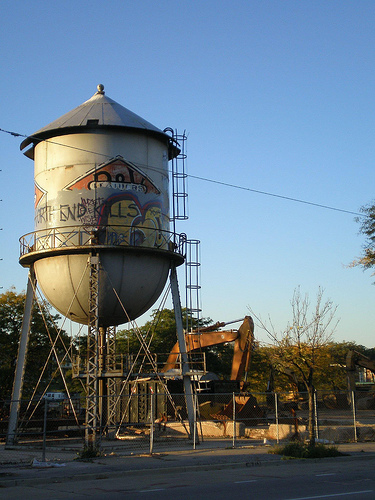 This July in Milwaukee, Wisconsin, the Pfister and Vogel water tower, from an old tannery building near the city’s park east corridor, was moved and placed it in its new location as a symbolic landmark of the ritzy new North End development–all 42,000 lbs. of it. The $175 million development will include new condos, apartments, stores, and river walks on a formerly blighted urban property. 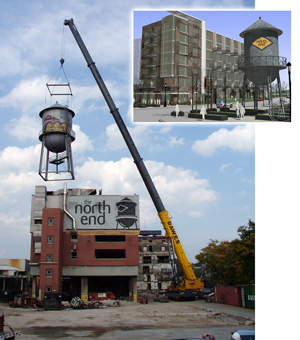 Photo #1, from davereid2 on Flickr. Photos 2 and 3 from www.forconstructionpros.com by Dawes Rigging and Crane. 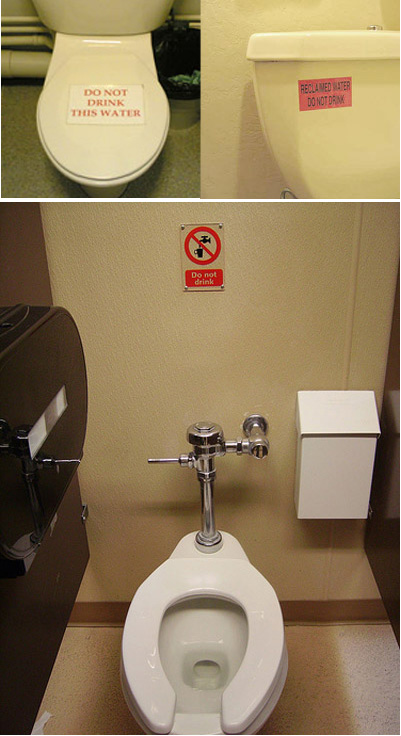 “Waste not, want not.” But in this case, “waste, want not!” Aside from an abnormal fear of liability, I’m not sure what’s behind (ha ha) the motivation to post these warnings. But (ha ha) regardless of the reason, it certainly creates irresistable opportunities for crappy wordplay and bun-puns.

All photos from Flickr, number one (ha ha) photo from digehode, number two (ha ha) from rockzombie and number three from followtheleader. 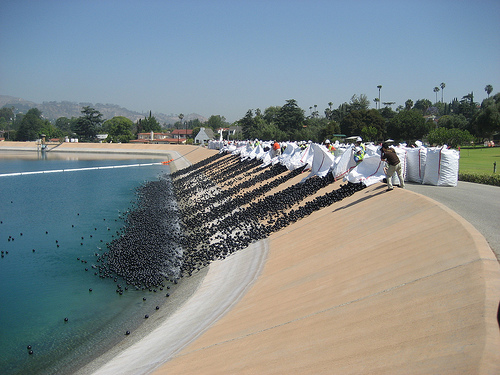 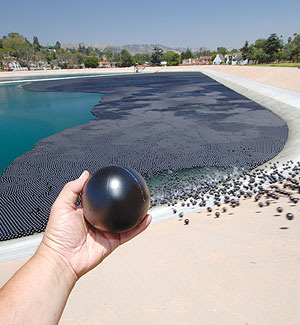 But… are the balls recyclable? Made from what…crude oil? Reportedly, when an underground storage facility is completed in 2013 and the balls are no longer needed the “shade balls” will be shredded or otherwise recycled. Seems like more of the same shortsightedness–solving the immediate problem while creating a new future problem.

And speaking of carcinogens, what about the sun-exposed plastics floating around in the drinking water supply? This is an issue that is still without definitive answers.

Aside from that, it looks insanely, irresistably freaky. Were it not so functional it could pass for an ambitious and visionary public art undertaking. Maybe they should have billed it that way.

First photo, from the Flickr photostream of councildistrictfour. Second photo, from Opflow Online at http://www.awwa.org. See also http://articles.latimes.com/2008/jun/10/local/me-balls10 for a news article with stunning photos and video. 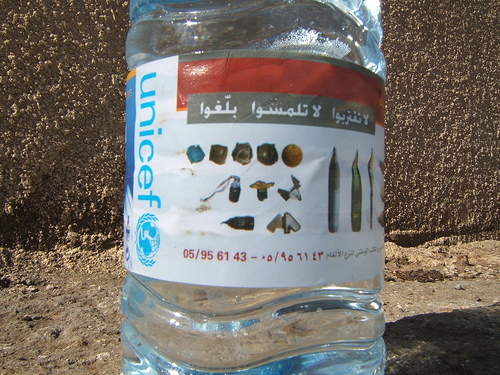 I’m not sure I’d find this particular bottle of Unicef water refreshing. The label shows photos of unexploded ordnance that might be found in south Lebanon, including land mines and cluster bombs. The Arabic translates “Don’t Approach, Don’t Touch, Inform.” From The Saff-ster on Flickr. 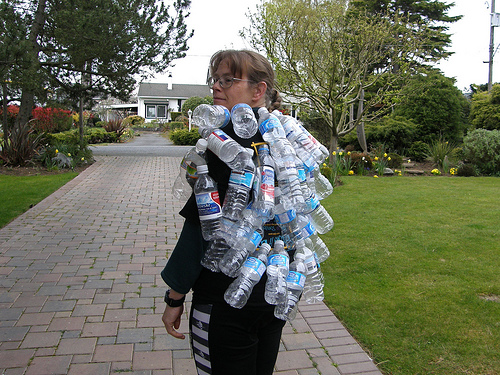 This unusual look was conceived to demonstrate the amount of waste generated by one person drinking bottled water for one month. Worn by flickr user katakanadian along a 10K race route–an auspicious setting for this particular message.