The needs of the public for a steady stream of water weirdness greatly outstrip the resources of this little blog. Plus, as it is now, it only creates one part-time job–and not even a paid one! With this stimulus shot-in-the-arm, we’re laptop-ready to hit the ground keyboarding. The first 10 e-mailers are hired!

Actually, this check is some obvious fakery from www.bankofobama.org where you can send your friends and enemies free virtual “stimulus checks” or a snail-mail paper check for just a couple bucks. It took 2 MBAs and 1 Geek to conceive and launch the site, which declares:

Bail out a friend today! Bad mortgage, student loan, credit card debt, Vegas trip…you know someone who needs a personal bailout for it.  Bank of Obama believes everyone should get their share of the stimulus package. 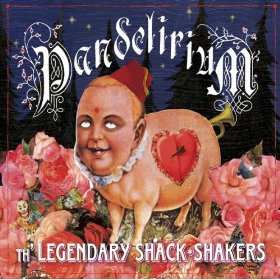 2006 rockabilly anarchy over industrial pollution. In a recent interview frontman JD Wilkes explained what this song is about:

The Union Carbide nuclear facility in Paducah KY has leaked toxic waste into the water supply for years, come to find out…producing mutations in its employees. And not far from that site, is where one of the first American school-shootings occurred. Coincidence? I think not.

Download Somethin’ in the Water – Th’ Legendary Shack-Shakers | band website
Low-fi 64 kbps Mp3 file for sampling.
Like it? Support the people who make music. Buy this track at iTunes or Amazon.com 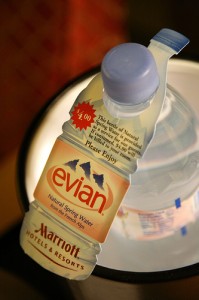 We usually feel it’s a crime to fail to recycle plastic bottles, but not always, as in this funny-but-not-funny case of felonious recycling and abuse of “fresh sink water” spotted by our pal  “Eagle-eye Jim”:

from hotelchatter.com…(readers were asked) to tell him about their fave minibar beverage experience. Sandwiched between the “minibars are stupid and expensive” and “minibars are lousy places for wine” comments, we noticed someone has responded with this:

Im ashamed but its too dam [sic] funny that i woke up in a drunk daze after a wedding and drank this whole Evian in the room then looked in the morning at the paper attached to the neck saying if bottle consumed, room will be charged 7.50 so i filled that shit up with some fresh sink water and used a lighter to seal that cap back on haha..

Here, we bottled water boycotters can have a good hearty laugh, while the bottled water holdouts can feel slightly uneasy. Whatever your opinion on tap water, I bet this might convince you to consider the merits of “fresh sink water!”

Photo: No, it’s NOT the actual bottle portrayed in the story, but one from mrjojo on Flickr. There is no evidence that this incident took place (or didn’t take place!) at Marriott. 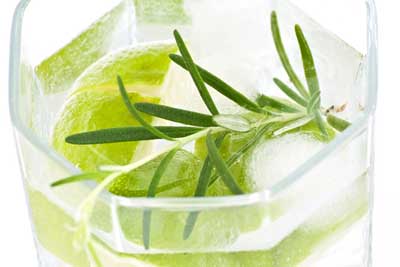 I know, I know, you’d never purchase just plain bottled water, but you crave that special energizing-oxidizing-ginger-ginseng-koalaberry flavor only available wrapped in plastic!

Fret no more, now you can have your tap water and flavor it too. There’s just one caveat, it may involve some preparation as they are “crafted with the care of sophisticated cocktails.” Ms. Bazs, one of our favorite quality-minded style-mavens, tips us to this entry at www.tastingtable.com:

Water 2.0
A new book elevates the most essential beverage

We applauded ourselves when we switched from canned soda to flavored water, but then we read that these colorful elixirs are just as loaded with sugar and artificial ingredients (not to mention their carbon footprints). Plus they’re expensive. Now what?

Thanks to a new book, you now can make healthy flavored waters at home. Cool Waters, by New York-based food stylist Brian Preston-Campbell, contains 50 recipes for water-based drinks that are full of all-natural ingredients.

Crafted with the care of sophisticated cocktails, the recipes range from post-workout quenchers to complex, food-friendly pairings, including the antioxidant-rich Wet/Dry, a berry-flavored drink made exclusively with dried fruit. It’s become our new predinner drink for nights when wine is out of the question. 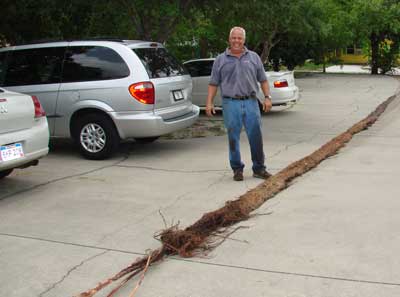 For every endeavor, there’s a “best of the best” list and if you’re with Roto Rooter, you’d aspire to this one. Each year Roto-Rooter Plumbing and Drain Service surveys 4,000 field technicians to honor (spotlight?) the year’s ”five strangest items recovered from pipes and toilets over the course of the year.”

The list for 2008 includes cats, diamonds and this record-setting, traffic-stopping 94-foot-long root extracted from a drainge pipe at the Manatee County United Way office.

In June, Roto-Rooter Contractor Bart Mathis of Sarasota, Florida was called to the United Way offices in Manatee County. The building had a clogged courtyard drain that caused the office to flood whenever there was heavy rain. Mathis cut into the underground pipe and found a giant root mass filling the entire pipe. When the root wouldn’t budge, he hooked up his 4 wheel drive truck to it and dragged it out of the pipe. Roto-Rooter had to close off four lanes of traffic because the root turned out to be 94 feet long and stretched across the nearby roadway. The monster root is one of the longest Roto-Rooter has ever extracted from a pipe. 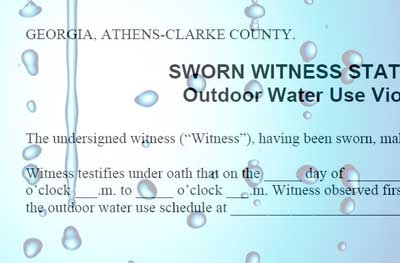 Watching your jerk-twerp neighbor thumb his nose at drought-driven water restrictions? Fuming as his sprinklers soak a perfect green lawn, under the cover of night, while washing his giant SUV on an ODD day?! And smirking at you while he does it? You’re MAD AS HELL, and you’re not going to take it any more!

If you live in Athens-Clarke County, Georgia, exacting revenge is just a few clicks away. Just download the County’s ready-to-go Sworn Witness Statement for Outdoor Water Use. It easy! It’s legal! It’s notary-ready with words like “sworn to and subscribed!”
UPDATE July 2009: This document is no longer available online, but I’ve archived a pdf copy here.

Fill it out, drop it by City Hall, and now it’s your turn to smirk while you watch his lawn go as brown as yours! Feel better? Good, but don’t start your own little micro water war. Make up, act neighborly and initiate some over-the-fence chatter about xeriscaping.

It was a tweet from WaterWired that alerted us:

Following quickly along, we tiny-url’d ourselves right over the the Christian Science Monitor:

The first beaver sighting in the Detroit River in at least 75 years has been hailed by wildlife officials as a sign that efforts to clean up the waterway are paying off. The animal was spotted by a utility company motion-sensitive camera.

Neat! But no picture! I’m a visual person, I’ve just got to see that caught-on-tape, homesteading beaver! On to Google, where I find 200-some stories, and…one picture? And when I have a look, I see why. The single photo is from Associated Press, an organization that’s quickly gaining a notorious reputation for crabbiness when others reproduce their content unaccompanied by a check. So I, too, cannot show you the photo of the beaver in question. 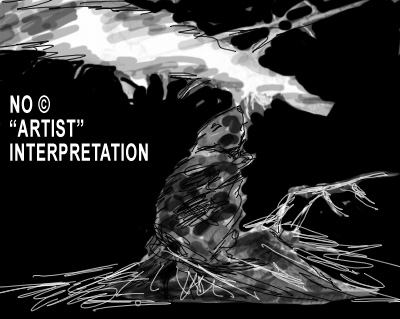 Instead, I’ve drawn it for you! (Now you see why I write for living, despite my Art degree.) No rights reserved at all, reproduce this all you like, and please don’t feel the need to blame credit me! 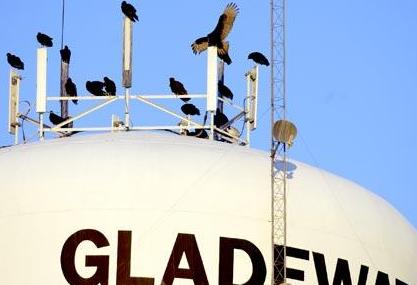 It appears as if a sequel to Hitchcock’s The Birds is shooting on location atop the Gladewater, Texas water supply! Of course, buzzards and vultures have been spooking mankind for eons; from Disney cartoons to classic literature, they frequently portend dying and death. So naturally, city leaders are worried that, “if the birds remain on the tower, their droppings will ruin the paint, which would cost about $80,000 to reapply.”

City Manager Jay Stokes discussed buzzards — the ones roosting on the water tower — Thursday with the City Council. Stokes said he has had numerous complaints from residents about the birds and has counted up to 80 of them on the tower at one time.

The city had a problem with the buzzards several years ago and eliminated them by applying for a permit and shooting them, Stokes said. If the birds remain on the tower, their droppings will ruin the paint, which would cost about $80,000 to reapply, he said. It’s also possible the birds could damage telecommunications equipment on the tower, Stokes added.

“I’m open to any and all suggestions from council members or others in the community about how to deal with this,” Stokes said. “The main thing to emphasize is that we don’t want to spend money on a temporary solution. We need to find something that will keep them away.

Stokes asked the council if anything was off limits as far as considering ways to deal with the problem. Councilman Scott E. Owens said Stokes should investigate all possibilities and take whatever action is necessary to eliminate the birds or get them to relocate.

“While I will try to find some sort of other solution first, we may have to be open to the option of seeking a permit to destroy the buzzards,” Stokes said. “I don’t know that there’s any way to persuade them to roost at another location.”

Anti-cultural-ignorance footnote: In many non-Western cultures, buzzards are traditionally a good omen, foretelling happy times ahead with health, luck, or wealth. 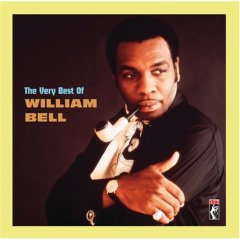 Sweet old Soul with fabulous flow. William Bell is still making music today but is best known for this 1961 B-side hit from the beginning of his career. (He actually wrote the song to express feeling homesick, not losing in love!) Lyrics:

But now you’ve left me
Oh! how I cry
You don’t miss your water
Till the well runs dry

Download You Don’t Miss Your Water – William Bell
Low-fi 64 kbps Mp3 file for sampling.
Like it? Support the people who make music. Buy this track at iTunes or Amazon.com.