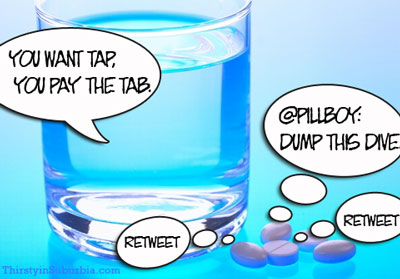 You’ve got to fight (bomp bomp) for your right (bomp bomp) to hyyyy-drate. With continued talk about emerging “water wars” we remember that the greatest battles start with a single shot. One blogger’s “shot” is brewing into a brouhaha that’s spreading across Singapore, and the opposition isn’t exactly waving the white flag.

“Doomsday” Jim, our sharp-eyed Southeast Asia trendspotter, tips us to this item from the malaysianinsider.com:

SINGAPORE, July 12 — A blogger in Singapore, upset that a restaurant would not serve her tap water which she needed to take her medication with, is urging diners to boycott such outlets.

Veron Ang — urged on by some netizens — went further and posted on her blog a list of 62 restaurants that she claimed do not serve free water. It provoked angry reactions from several of the eateries which said they do serve water without charge.

Ang said that in May, she dined at a restaurant in the west that refused to serve her water although she needed it for her medication. After she “Twittered” the incident, her friends urged her to create a list of similar eating places. She compiled an initial list from her own experience, as well as going to reviews on a food website, and asking friends on Facebook and Twitter.

After her list was posted on blog aggregating site Tomorrow.sg, other contributions started flowing in. Her initial list, first posted last month, grew to 62 restaurants. It has been circulated by many Twitter users and websites.

As the list (posted here) of no-free-tappers grows in submissions, traffic and media attention, proprietors are responding–some angry, some dismissive, but all unappreciative of the exposure.

The marketing and sales manager for The Tapas Tree Group, Lyn Yip, said: “We find this list to be libellous, and will not hesitate to engage our lawyer if we are not removed from the list and the situation is not rectified immediately.

“We live in a time when the influence of web opinion cannot be ignored, so bloggers have to approach their entries with responsibility, especially when composing defamatory lists.

The managing director of Italian restaurant La Forketta, Gracie Vitale, said: “Our patrons are serious diners and come for our food, not to taste water. It’s the customer with a budget who insists on tap water.” She added that, outside Singapore, “nobody really asks for tap water”.

Jeffrey Jumahat, manager of Cafe Le Caire which does not serve free water, also shrugged off the list’s boycott exhortation. “To be frank, I don’t think customers will just boycott because of water. There’s no urgent need to take action at this point of time,” he said.

Jack Chin, co-founder of Mad Jack’s, said his chain of four restaurants does not serve free water because manpower is needed to refill and wash the glasses. He added: “People who complain are not educated about business costs because nothing is free.”

Taking the list seriously is Alps Cafe owner Danny Ang, who is rethinking his policy of “free water only if you ask for it”. His cafe had stopped serving water at dinner only late last year, but he does serve free tap water to customers who want it. He said: “I’m worried about the list. If customers really want it, I might consider raising the price of the food to give everyone free water.”

Sales manager Renee Koh, 32, said: “Serving plain water for free should really be part of the service experience and I find it hard to think that the costs are that high, given that the water served is just chilled tap water.”

Aun Koh, director of media and lifestyle consultancy Ate Media which published Asia’s first restaurant guide The Miele Guide, said: “In Singapore, there is no excuse other than snobbish vanity to drink bottled water and no reason other than an attempt to increase revenues for restaurateurs to refuse to offer tap water to their patrons.” — Straits Times

Best of 2009: Bottled Water for Pervs