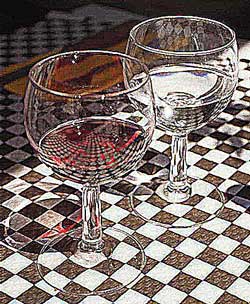 Stock-up time! We heard it through the grapevine… there’s a wine glut in Australia to the point that wine prices have been driven lower than some bottled waters. Where are we headed here? Maybe the 21st-century religious miracle will be changing wine into water! (Last fall, we posted here about cheaper-than-water alcohol in the UK.) According to www.news.com.au,

Major wine retailer Dan Murphy’s is currently selling cleanskins for $1.99 a bottle – cheaper than some bottled water – due to the oversupply crisis that has led to some vineyard owners leaving grapes to wither on the vine.

The unprecedented meltdown in the Oz wine biz has also precipitated a fire-sale of unprofitable vineyards. Australia’s biggest winemaker, Foster’s, is selling 31 of its vineyards across the country. Winemakers pow-wowed at an emergency meeting and concluded that 20% of vines needed to be phased out in the next three years to correct imbalance.

Strong export sales led to over-optimistic outlooks for Australia’s wine industry and a doubling of vine-producing areas over the past decade. But forecasts of more than $3 billion in export sales by next year have been dashed by overseas competition, an excess of cheaper wines and the global financial crisis.