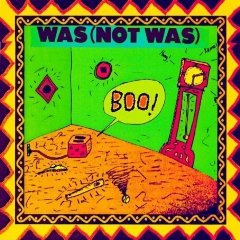 This very catchy, funky bluesy track isn’t about plain water, but “crazy water” and the economic boom and bust it created during and after Prohibition in a small Texas town. In 2008 the cult-favorite band Was (Not Was) released its first album in 16 years, called “Boo!” (For more on their story including how they came up with that band name, read this article on npr.org or this first-person account from the Seattle Times.)

Lyrics
In a deserted town at the corner of Main and Third
there’s nothing moving, not a butterfly nor bird
used to be some action here,
big motel and movie stars
but its been like judgement day,
trains and planes and fancy cars
The Senator’s Son and the President’s Daughter,
all came to town for that Crazy Water.

It was the pride of northern Texas,
an oasis cool and clean
now its just a dusty truck stop,
an evaporated dream.
The Senator’s Son and the President’s Daughter,
all came to town for that Crazy Water.

Download Crazy Water – Was (Not Was)
Low-fi 64 kbps mp3 file for sampling.
Like it? Support the people who make music. Buy this track at Amazon or iTunes.