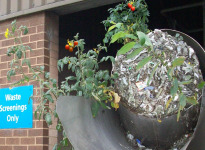 Care for some “organically grown” tomatoes? Dozens of tomato plants are sprouting up in sewage works and places where sewage travels in a process that works like this: 1) people eat tomatoes; 2) people excrete tomato seeds; 3) seeds travel via wastewater to sewer works; 4) seeds resurface as stray plants in odd sewage- and sludge-touched locations.

It’s not an uncommon occurrence, but this year’s poo produce crop is apparently impressive! From the Yorkshire Water website,

Over the course of the summer, hundreds of tomato plants have sprung up at our treatment works across the region, often sprouting in some of the most unlikely of places, including skips full of toilet paper and other rags removed during the treatment process.

And whilst there have been instances in the past of tomatoes cropping up at works in the region, it is thought that the higher-than-usual temperatures over the summer, coupled with regular bouts of rainfall, have played their part in ensuring many of our works can boast a bumper yield this year.

They arrive at sewage works where some are among the waste removed at the first stage of the treatment process before being compressed and stockpiled in skips – and it’s in these that many tomato plants have taken root and flourished.

If you should see a mysterious tomato sprouting randomly in the wild, it might be because…umm…most of the seeds find their way into

…much-sought-after compost, which is then distributed to farms and local authorities.  Invariably, the compost contains tomato seeds which grow into plants, prompting regular stories from farmers who report rogue tomatoes growing among their crops. 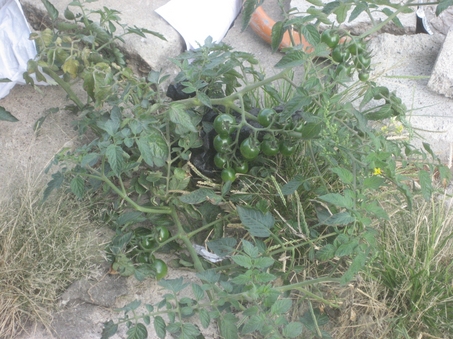 In 2007, citizens in Hoboken, New Jersey protested that wayward tomato plants mysteriously growing in desolate urban settings testified to the severity of the city’s flooding and sewer overflow problems. As reported on nj.com/hobokennow,

“We know raw sewage is backing onto our streets. You can’t say that this is definitively from the flooding, but it’s very possible,” said Dawn [Zimmer]. “These tomatoes were not planted here. Does this look like a community garden to you?” The plants are growing in an empty lot, filled with mud and gravel. In one spot, gnarled tomato plants are even growing out of cracks in the sidewalk. On Marshall Drive, they are growing from underneath a chainlink fence. 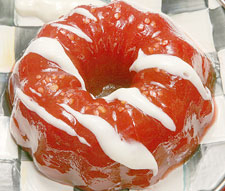 I guess this is teaching us, in semi-biblical fashion, that you reap what you go. Get cookin’!
Recipe: Aunt’s Florence’s Tomato Surprise
(Ingredients include—seriously!—canned tomatoes.)