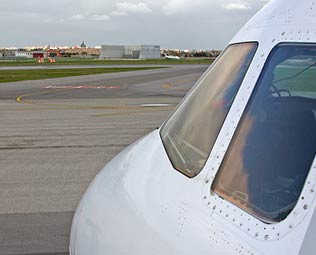 Nervous flyer? Then here’s another thing to worry about when you’re airborne: Is dangerous bottled water perched up in the cockpit, ready to ignite?

“Doomsday Jim,” this blog’s eyes and ears in OZ, tips us to this story. From the Courier Mail Queensland,

A bottle of water caused a fire in the cockpit of a Airbus A320 passenger aircraft as it was about to land at a Queensland airport.

According to an Australian Transport Safety Bureau report, the pilots were lining up on the runway when they smelled smoke last month.

It was coming from the cover of a log carried in the cockpit to record inflight defects in mechanical, navigation, electrical, hydraulic and radio equipment.

The incident was reported to the bureau, which investigated and concluded a water bottle was to blame.

“The sun was shining through a water bottle at the side of the cockpit,” the ATSB report said.

“The bottle was focusing the sunlight like a magnifying glass on the cover of the cabinet defect log, which began burning.”

One reason I love Australian news media is their mastery of the subtle-but-clever news story punch line. And in this story, it’s a winner!

The bureau did not say whether the water in the bottle was used to douse the fire.