For the First Time Ever, Donuts Actually
Hamper the Movement of Poo 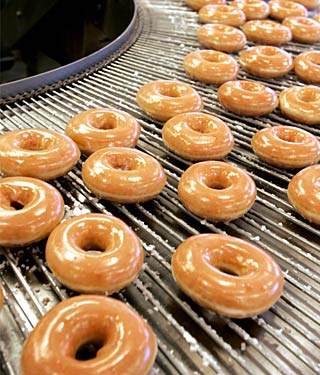 You know what a couple of greasy donuts can do to your digestive track. Just imagine what a whole plant-full could do to a sewer system.

May 29, 2009: Fairfax County (Virginia) is suing Krispy Kreme doughnuts for alleged damage to its poo pipes…clogs that resulted in raw sewage leaks that shut down the southern Fairfax sewer system. The suit was filed after Krispy Kreme refused to pay a $1.9 million bill for repairs to the system. The lawsuit says the damage was caused by “excessive quantities of highly corrosive wastes, doughnut grease and other pollutants.“

PUNCH LINE: The county says its workers once ran a closed-circuit camera inside a pipe to show the grease deposits, but the camera got stuck in the goop.
SILVER LINING: The Krispy Kreme goop could be used to prevent sewage from entering streams or waterways.

Read all about it here. Photo: New York Magazine

Poo in the Bayou, “We already used to it.” 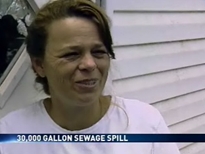 May 29, 2009: At the Wilkerson’s Memorial Day Cookout in Bayou La Batre, Alabama, some uninvited guests have floated by from the nearby ditch water. Over the weekend, rain pushed more than 30,000 gallons of raw sewage into the streets.

Mobile County Resident Belinda Wilkerson says, “You don’t know what the hell’s in them sewages.” She’s not shocked, either. “Yeah, I know what they talking about cause you can see it any time it rains. All that nothing but human waste laying out.”

In fact, people in these parts aren’t even fazed by stormwater back-ups nor are they anxious about long-promised upgrades to the old and inadequate sewage treatment facility.

PUNCH LINE: Local resident Alisha Harbison says.”We already got used to it. What’s the difference. I mean, we already used to it.”
SILVER LINING: The local wastewater utility has no difficulty hiring workers who will dig in and do the dirty work.

Read all about it here. Photo: NBC15online.com

May 26, 2009: In Kuatan, Malaysia, Abdullah Salleh and his wife were thrilled to be moving into a new house provided under the Hardcore Poor Development Programme (PPRT).

Upon moving in their new quarters, though, they discovered they needed to employ old methods to answer the call of nature, i.e., digging holes in his backyard.

They were forced to dig a well by the side of his house and use a pump to fill pails and containers with water for bathing, cooking and washing clothes. Seems the contractor built the washroom and toilet but failed to equip them with a sewage system and piped water. Abdullah understandably is “worried that human waste might contaminate our water supply and make us sick.”

PUNCH LINE: Inderapura assemblyman Datuk Shafik Fauzan Sharif points out that, “Abdullah actually lives with his in-laws at their home nearby.”
SILVER LINING: Abdullah has a unique opportunity to become closer to his in-laws.

Read all about it here. Photo: The New Straits Times 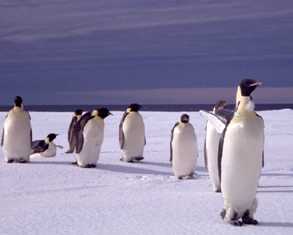 June 2, 2009 via AP – In remote Antarctica, researchers have been unable to figure out just where colonies of emperor penguins live and if their population is in peril. But Eureka! Scientists have discovered they can  track the penguins by following their excrement from space.

Because the large penguins stay on the same ice for months, their excrement stains make them stand out from space. Scientists at the British Antarctic Survey found by accident a reddish-brown streak on the colorless ice when they were looking at satellite images of their bases.

The stain was penguin excrement (particularly smelly stuff) and it gave researchers an idea to search for brown stains to find and track penguins. They found the same telltale trails all over the continent. Using satellite data, the scientists found 10 new colonies of penguins and overall, 38 colonies were spotted from above.

PUNCH LINE: One noted researcher said that salty penguin poo, over time, will corrode one’s boots, adding that he has lost nearly a dozen pairs to it in 35 years of penguin research.
SILVER LINING: Using satellite technology, researchers can wear more stylish boots.

Read all about it here. Photo: geocities.com