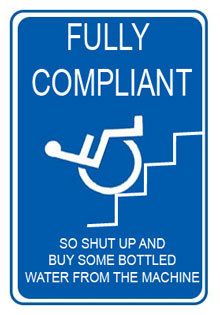 Don’t call them handicapped, call them stair-challenged! In the Du’OH! News category this week, spotted in the real-ink version of the Kansas City Star and online at mankatofreepress.com, the parched and wheelchaired crowd will need some serious new torque in Hudson, New York:

In April, officials in Hudson, N.Y., proudly unveiled their state-of-the-art water fountain for the disabled in the county courthouse, a fixture whose installation was agreed to in a 2003 settlement with federal officials enforcing the Americans with Disabilities Act. However, the fountain was installed on the courthouse’s second floor, which is accessible only by stairway. In defense, county officials said the fountain had several features for handicapped people other than those in wheelchairs.