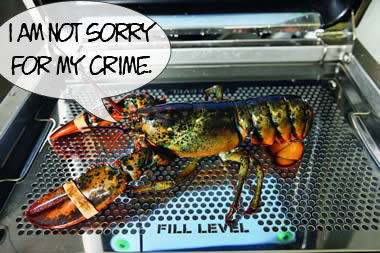 Are you “soft” on seafood? If you can’t bear the sound of that “screaming” lobster as it’s plunged into a boiling stockpot, take note: we’ve run across a new product (via www.dailymail.co.uk) named the CrustaStun, which offers a more humane way to get that fresh seafood to diners’ plates. Somewhat like a shellfish taser, the device electrocutes the animal with an instant current which anesthetizes and kills shellfish within seconds.

There are two models–“The Stunner” for food processors and the “Single Stunner” for restaurants. No word yet on development of a home model…the George Foreman Mini-Stunner, maybe?

In the “more than you want to know” category, here’s the science behind the device, as explained on www.crustastun.com website:

The application of a stun (110 Volts – 2-5 amps) causes an immediate interruption in the functioning of the nervous system of the shellfish. By interrupting the nerve function, the shellfish (be it Crab, Lobster or other) is unable to receive stimuli and thus by definition, cannot feel pain or suffer distress (Dr. Dave Robb 2000 – Bristol University – paper on sentience in Crustacea, Baker 1975, Jane Smith 1991, Bateson 2000, Sherwin 2000 & Gregory & Lumsden 2000). The prolonged application of the stun causes a permanent disruption which kills the shellfish.

If you’re simply not bothered by the death-by-boiling method, current and pending legislation could make your violent sadistic meal prep against the law! Their website also notes that:

New Zealand & a number of Australian Provincial States include Crabs, Lobsters and Crayfish within the definition of animals requiring humane treatment in handling and killing; NZ; Animal Welfare Act 1999.

It is unclear whether Crabs, Lobsters and Crayfish are included within the current UK Animal Slaughter Regulations. They are however likely to be specifically included in the Animal Welfare Bills currently going through the UK & Scottish Parliaments. This would require them to be ‘humanely killed’.