How high is Corbin’s water tower? Literally or figuratively? It seems that some of the town’s drug-crazed youth found that the town’s tower was a great place to cook up a little methamphetamine! Yessir, I’m talkin’ ICE, and not the frozen kind! 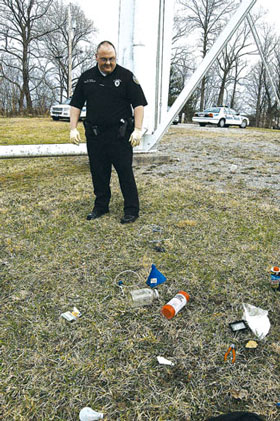 Not litter but evidence. Photo: thenewsjournal.net

The Corbin, Kentucky police have nabbed a 17-year-old boy on numerous felony charges after a portable meth lab was found tucked in a backpack right by the city’s landmark water tower. (When authorities arrived, the teen was carrying a generator out to the water tower “lab.”)

(Police Sgt. Glenn)…”Taylor said he believes the boy was a methamphetamine addict who has been making it for himself and some other friends. He said police searched a home last week, where the boy was allegedly staying, in an attempt to find evidence of drug activity, but found none.

“My informant said this backpack was there. They knew we were coming and started hiding it up here,” Taylor said. “They don’t keep it at their house because they are afraid I am coming.”

So what was found at the tower?

Police discovered nearly all the ingredients for making meth: tubing, salt, drain line cleaner, fertilizer, anhydrous ammonia, a funnel, a propane torch, etc. Also discovered was a large Mason jar that contained a “pill soak.” Taylor said it appears that the “meth oil” most recently produced had already been poured off the mixture. He believes the juvenile was returning to the site to make another batch. He said there was enough pseudoephedrine present to make anywhere from 2.8 to 4 grams of meth.

And in case you’re wondering, “Authorities say if the meth lab had caused an explosion it probably wouldn’t have been bad enough to put the water tower at risk – but certainly the person making the meth.”

If this weren’t such a tragic state of affairs, I suppose I could have a field day creating fake-funny slogans to be painted on the tower. (Like, “CORBIN: THE CRYSTAL CITY!”) But somehow, I just can’t get in the mood to make light of the national misery that is meth. It’s just too sad.