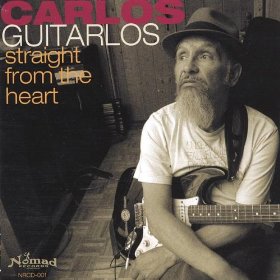 Hard living has taken its toll on Carlos Guitarlos. In the 80s he was lead guitarist and songwriter for the cult-fave Los Angeles group Top Jimmy and the Rhythm Pigs (immortalized by the Van Halen song) and also recorded with Tom Waits and the Breeders. He spent most of the 1990’s just gettin’ by as a San Francisco street musician.

The 2003 album Straight from the Heart marked his personal and career comeback, and he’s reportedly now at work on a new acoustic collection. The bluesy-jazzy Drought Song reveals a raspy, ravaged voice and tepid backup, but it’s honest, sincere and enjoyable just the same.

This is a drought year now
Or so they say
You’ve got to use less water, everyday
Commissioner says he’s trying
You and I know he’s lying
Now it’s near

They say they can seed the clouds, and more in time
If you ask mother-nature, that’s a crime
And if we delay an hour, yes we will feel the power
Don’t you care?

Look at my garden, see how lush she grow
What’s my secret… wouldn’t you like to know?
Well, I’ve just been crying for hours
So we won’t lose the flowers
Don’t you cry

Download The Drought Song – Carlos Guitarlos
Low-fi 64 kbps mp3 file for sampling.
Like it? Support the people who make music. Buy this track at iTunes or Amazon.com