While urban dwellers enjoy ready access to city amenities, a trade-off is the distinctly urban micro-bath. Why, I could fit most of these city loos inside my obnoxious suburban garden tub…which I never use, as it requires an obnoxious amount of water!

If you’re dealing with cramped quarters in your citified bath, the solution, as always, is abundant dollars and over-the-top design ideas. END_OF_DOCUMENT_TOKEN_TO_BE_REPLACED

If you think there’s not much you can do with the bland look of white porcelain, the cooler-than-us people at Hu2 Design have come up with something affordable, impermanent and way, way out there. Their “Smart Vinyl Laboratory” features vinyl stickers can be applied to any smooth surface…like this one! And renters, note, they are completely removable.

A bargain at £20, given the huge amount of attention you can expect to get from any guests who may use your facilities! 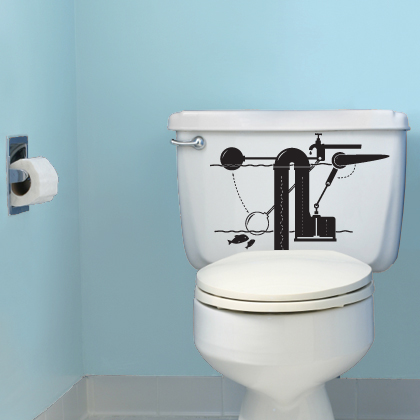 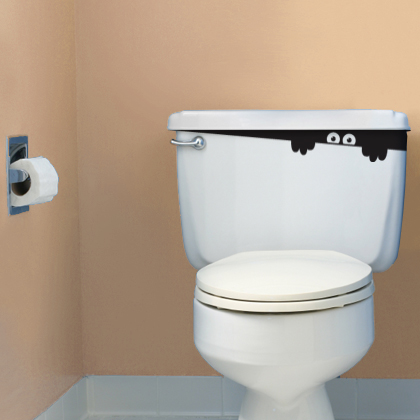 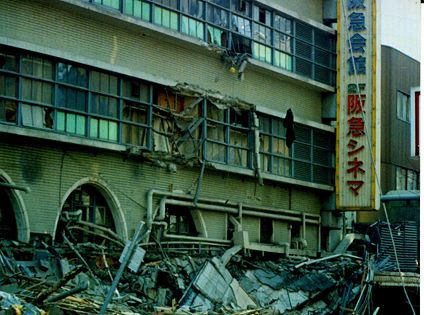 Have you considered that in an emergency, your bath water might “save you from great embarassment?” Kobe, Japan’s website shares real-life experiences of citizens who were victims of the devastating Great Hanshin-Awaji Earthquake to encourage people to start thinking about disaster contingency plans. Here, Nada Ward, age 24, writes…

On the day of the earthquake, my husband was on a business trip and there were just two of us, myself and my child. I was so terrified by the seemingly never-ending after-shocks that we went to take shelter in our next-door neighbor’s house. Because I was under such stress, I had an upset stomach and went to use the toilet. There, something happened that I had never dreamed of. I could not flush the toilet. I did not know what to do. My neighbor’s wife brought me a bucketful of water from the bathtub.

In their household, they always used to leave their bath water in the tub undrained so that they could use it for washing or in case there was a fire. I was saved from great embarrassment because of this.

The 1995 Kobe quake left nearly one million homes without water and power. Electricity was completely restored in a week but it took over two months to fully restore drinking water. So there, shower-loving Americans, take a bath instead and don’t pull that plug just yet. Especially you folks near the fault lines.