First, it was raining fish from the sky! Twice! Read all about the ultimate fish story from the territorial town of Lajamanuat via ntnews.com.au and don’t miss the memorable first-person account in the story:

Mrs Balmer, the aged care co-ordinator at the Lajamanu Aged Care Centre, said her family interstate thought she had lost the plot when she told them about the event.

“I haven’t lost my marbles,” she said, reassuring herself. “Thank god it didn’t rain crocodiles.”

And there’s hard proof that Mrs. Balmer hasn’t lost her marbles: she had enough of her wits about her to snap the following photo of some of the fish collected in a bucket! 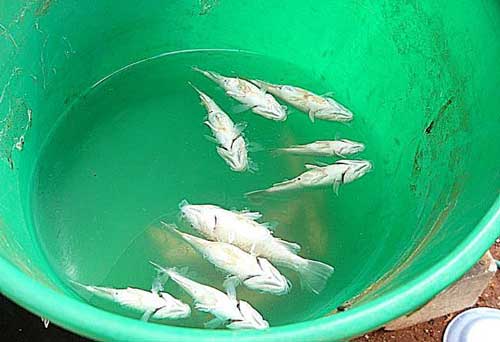 The second item again involves fish showing up in an unexpected spot. In the inland community of Mutchilba, Tony Bambino nabbed the catch of the day by grabbing a 30kg barra from an irrigation channel with his bare hands!

While driving home he spotted the huge fish swimming in the Sunwater irrigation channel.

“It was about 4pm in the arvo and I saw something shiny in the water,” he said. “Once I realised what it was, I grabbed it by the mouth with my hands. It took about 10-15 minutes to catch it and the hardest part was pulling it out of the channel and into the back of my ute.”

The story at Cairns.com.au notes that “Mr Bambino said the irony of his large catch was that people spend thousands of dollars on fishing rods and lures and he managed to bag one driving along the channel.” 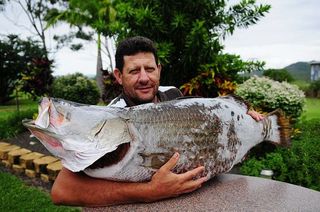 And there a photo! (Jennifer Eliot, Cairns.com.au) Good thing, or we’d all think he’d lost the plot!