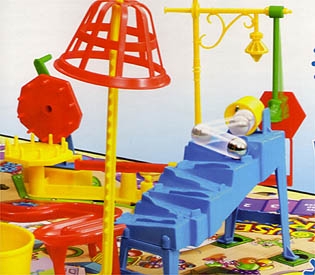 You know that great idea you had for purifying water? Boy, if only you had some way to get that to market, why, you’d be rich!

Actually, your timing might be perfect! Since you live in the age of open collaboration and “crowdsourcing“, maybe, just maybe, your idea is just right for Procter & Gamble, the 8th largest corporation in the world by market capitalization and 14th largest US company by profit. (And supposedly, the folks behind game-changing business innovations such as modern “brand management,” soap operas and Pringles faux chips!)

P&G’s “Connect & Develop” brings it to the web with a database of inventions and innovations that P&G is actively seeking. According to the website,

P&G’s Connect + Develop strategy already has resulted in more than 1,000 active agreements. Types of innovations vary widely, as do the sources and business models. Inbound or out, know-how or new products, examples of our success are as diverse as our product categories. We are interested in all types of high-quality, on-strategy business partners, from individual inventors or entrepreneurs to smaller companies and those listed in the FORTUNE 500 — even competitors.

What’s there for the water innovators? Consumer-driven P&G is in fact, actively seeking three “solutions” for water purification and drinking water technologies:

So water-invention smartypants, download that form, get everything signed, sealed and delivered and just sit back and wait for the checks to roll in. Oh, and don’t forget my finder’s fee.

You can’t help but smile at his silly antics though they spotlight a serious problem: sewer blockages and flooding, half of which are caused by Numptee and his buds putting inappropriate items down the drain. From campaign headquarters at yorkshirewater.com, 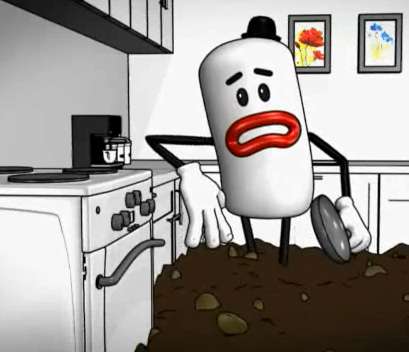 Numptee, did you just put that cooking fat down the sink?

Yorkshire’s sewers are being abused and it’s causing all kinds of problems. You wouldn’t believe some of the things we find down the sewer – nappies, false teeth, fat, Christmas trees and even a Spacehopper! As funny as that sounds, all of these things can cause the sewer to stop working and this can lead to flooding.

Hmmm, are we talking about you? You might be a “Numptee” if:

Now, Numptee’s handlers at Yorkshire Water aren’t idiots so naturally the campaign is multi-media and backed by numerous social-media channels. You can follow the red-lipped phenom on Twitter (@MrNumptee) because…

By following Mr Numptee on twitter you’ll be able to see if we are dishing the dirt in your neighbourhood and take a sneaky peak at some of the unusual things that block up our sewers – yes that’s right we really do find strange things down there including one particular problem with knickers!!! 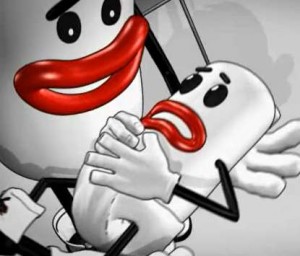 If you’re like me, you don’t want to miss a single episode on Yorkshire Water’s YouTube channel. Contest-entering types can give their creative interpretations of exactly what kind of creature Numptee is (see the WIN tab) with top entries receiving cinema tickets, where…that’s right, Numptee trailers will be playing!

I found a lot of interesting information on the campaign’s web pages, including a neat tip to make “Bird Cakes” out of waste fats (the recipe is here.)

Numptee? Bin there, done that. You: don’t do it.

Part Two: And now, a word from our water sponsors from decades past! We’ve been interrupted by advertising for drinking water for at least a half a century. Following, more of of “the way we were.”

Combine the 1986 coolness of Flashdance and Pumping Iron, then add Evian water.

“Nothing else will do” but Perrier in this jazzy, stylish-in-’87 animated spot.

And now, a word from our water sponsors from decades past! We’ve been interrupted by advertising for drinking water for at least a half a century. Following, a taste of “the way we were.”

1958 Perrier Party, the only thing missing is the Rat Pack and Vegas imagery.

Technically for Hamms Beer, but includes a “rain dance” for the beer that’s “refreshing as the land of sky blue water.” (1950s-vintage)

It’s the Thirsty in Suburbia Super Water Flea! Following are 10 hand-picked examples of rare, unusual and weird water-related merch just waiting for your winning bid. (We count the purchase of vintage items towards your recycling/reuse do-gooder ranking!) 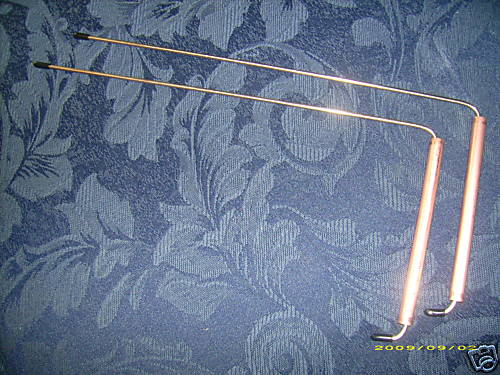 1. Brass Dowsing Rods Finds water! Plus treasure and lost items, too! These rods are made of brass with copper handles. The handle/sleeves give the rods plenty of room to move and any dent or bend won’t affect the rods. Get your shovel ready, your new well is on the way! Starting bid $9.99 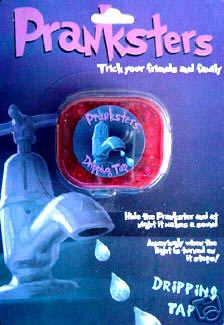 2. Drive someone slowly, excruciatingly mad with the  New Dripping Tap Noise Maker Joke $5.99 Hide this little item and when the lights are out It it makes a noise like a dripping tap. When the lights go on, it stops…so the victim never finds its. 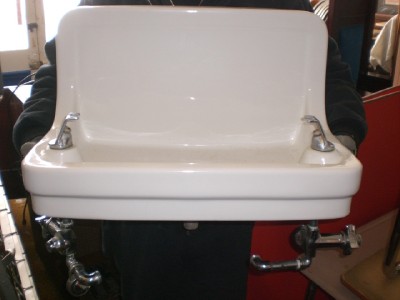 3. For $299 a Vintage Retro 2-head porcelain water fountain. Made in the USA, too! Seller notes it would be an interesting detail to a home or business. I’ll say! (You pick it up in central New York…will not fit in a flat-rate box.) Don’t laugh… remember the fab thing that Katie made from an old tub?) 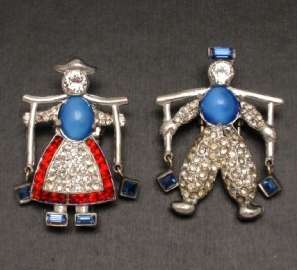 4. Jack and Jill Water Carrier vintage pins/fur clips Their little moonglow stone bodies, cute buckets of blue stones and pave rhinestone outfits make toting heavy water buckets seem glamorous! Lobbyists, these would be awesome to wear when you’re power-tripping up “The Hill” to fetch some support for your water issue! Get the set for $139.99. 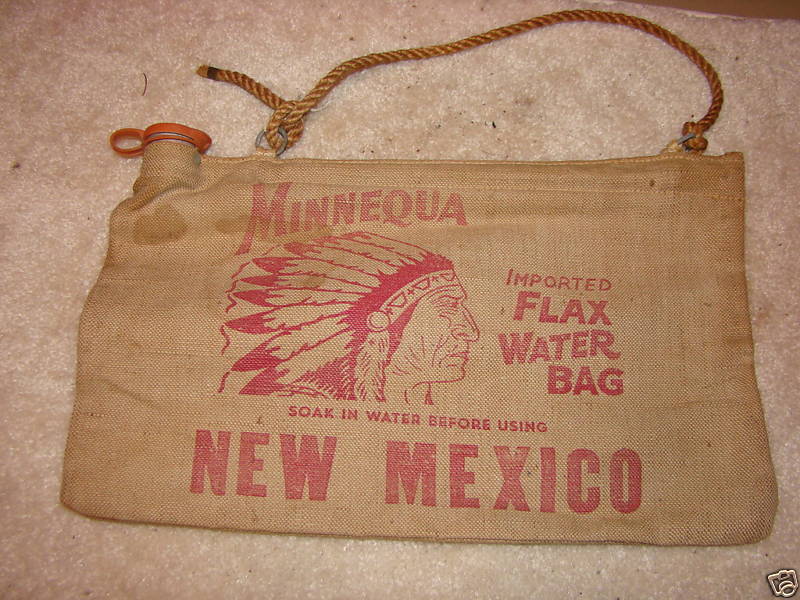 5. Vintage desert water bag “Imported flax” water bag is in “very good condition with a few small water spots as you would expect.” This is what your Grandpa would have on hand should his automobile overheat over while motoring through the desert miles from civilization. Now? Might make jaunty decor for a Santa Fe TGI Fridays. 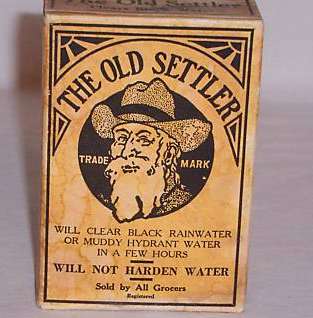 6. Filter, schmilter. The bidding starts at $3.50 for this 10 oz. box of Old Settler Water Clear. It was made in Findlay Ohio and has the price of 13 cents stamped on the top of the box. The box includes directions on how to use the product to clear dirty water. (Better jump on this… it’s no longer “Sold by All Grocers.”) 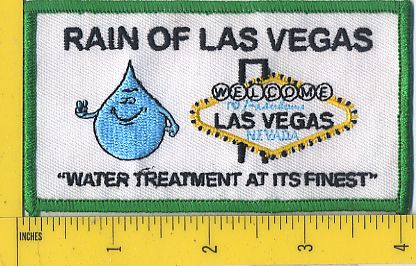 7. For $4.95, buy a Rain of Las Vegas Nevada Water Treatment Patch. Original purpose and origin not known. Why buy such a thing? Because then you would have it. Simple as that.

8. $9.95 Bottled Water from Sheri’s Ranch, the “world famous brothel” in Pahrump, Nevada. I can’t decide whether it is sensible or senseless to buy bottled water at a brothel. Buy with confidence, I’m told “the government” regulates both of them. 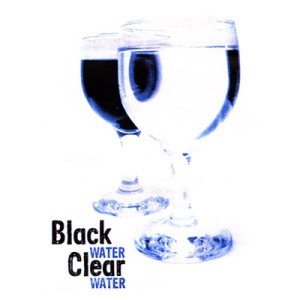 9. Black Water Clear Water Magic Trick Amaze your friends and enemies by turning ordinary water an eerie dark black and then clear again! $17.50 (This item Involves mysterious unidentified chemicals.) Water treatment professionals: try this stunt at your next public forum and I’ll bet you win unanimous support for your proposal! 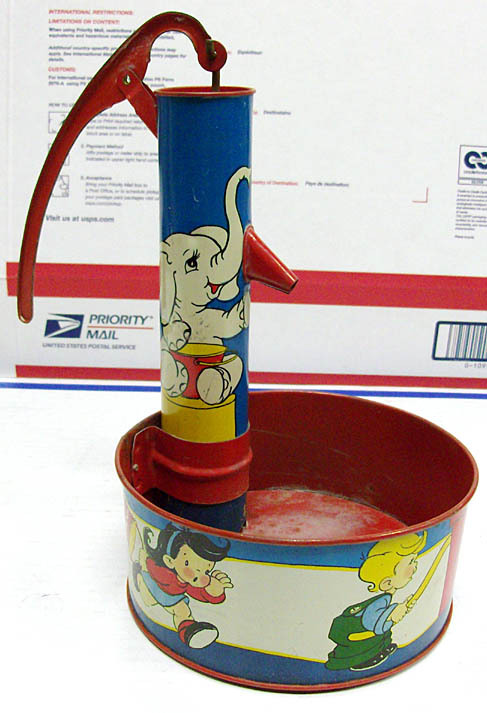 10. Vintage Ohio Art Tin Litho Water Pump featuring Jack and Jill! 10″ tall antique toy in very good condition. A nostalgic throwback to the old days, when children played outside and running water was a workout. Two bidders already in, $20.49 at this writing.

Owning a boat from Water Werks will make you a real man! (Some restrictions apply.) Yes, this is a real ad and not a parody. If humor sells, this Illinois boat dealer should brace for a flood of new business. The hilarious commercial revels in it’s krazy, low-brow, bad-production-value approach… and succeeds gloriously.

And it reminds me, in broad concept anyway, of this infectious Saturday Night Live clip, “I’m on a Boat.” (Warning: contains a boat-load of explicit lyrics.)
I’m on a Boat (feat. T-Pain).

With demand dropping and prices with it, the bottled water industry needs new business models, and UK-based Soak Media is promoting one tried-and-true idea. Borrowing a page from ad-supported free media, Soak is passing out free ad-laden bottled water to Londoners this summer. 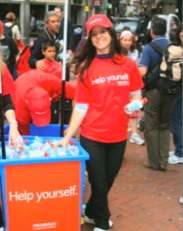 Billing itself as “the refreshing way to talk to Londoners”, the site urges advertisers to…

Get hot and bothered London commuters to engage with your brand by advertising on one of the deliciously cold bottles of mineral water we’ll be handing out across the London commuter network this summer. And don’t forget: this summer’s going to be an absolute scorcher!

Soak Media’s video details their right-time, right-place strategy during “London’s hottest months of July and August.” The company will also do “leaflet tip-ons and bottles moulded to any shape.” And don’t forget, the water is “handed out by our very friendly staff” and enjoys “50 minutes in-hand time.” (And an eternity in a landfill after that?)

Oddly the video ends with the cryptic and vague statement, “all our profits go to charitable causes.” Guess I’ll let that one soak in for a moment.

Somehow, fear as a motivator has fallen out of favor. Back in the day, though, scaring the tar out of kids was a perfectly acceptable method for keeping them in check. This 70s-era water safety clip from the UK was designed to educate by terror, with a creepy grim-reaper type character lurking in the waterways, ready to “trap showoffs and fools.” I’ll bet this put a damper on waterside playtime for the young Brits of the time!”

It’s bottled water, Nestle, PR Newswire, Facebooktwitterblogwebsitesocialmediaplan, all wrapped into one. It’s brand-new Re-Source(TM) natural spring water, Nestle’s new greener-than-thou entry into the more-environmentally-aware bottled water market. They’re out to raise our awareness and educate us about recycling! And, we’ve got Whole Foods, greenopolis.com, Cradle to Cradle(SM) AND Keep America Beautiful to round out the festive enviro-bandwagon.

Capsulized, what this PR-social media onslaught is all about:

Wow! For those who love bottled water’s convenience, here’s a bottled water that’s actually MORE labor intensive than reusable water bottles! While bottled water has it’s appropriate time and place, WHO would do this? Who would actually buy this water, haul the empties back to their Whole Foods re-source-branded GreenOps(SM) tracking station (if available), register and track their efforts via the web… all for Nestle’s 100% recycled goal, a nickel per bottle for Keep America Beautiful, and a ready supply of overpriced packaged water?

Call me a cynic, say I’m ridiculing a noble effort. The simple truth, as I see it, is: recycling is a third choice behind the higher goals of NO-USE and RE-USE. I don’t believe we should congratulate ourselves on recycling a resource that we didn’t need to consume it in the first place.

Use only what you have to. Re-use whatever you can. Don’t be wasteful. Simple.

UPDATE/AFTERTHOUGHT: For more reading pleasure, awareness and education, check out Waterwired’s post and link earlier this year to the 2008 corporate citizenship report from Nestle Waters North America. (Pretty infographics, judge the content for yourself!)

Grass is dumb, so don’t waste too much water on it—it’s too stupid to notice! There’s an oddly malevolent outcome in this offbeat spot from the creative-minded conservationists at Denver Water.