As you’re pondering what to do with all that leftover Thanksgiving turkey, ponder this from the New York State Department of Environmental Conservation. In the Letters section of the October 2008 Conservationist: 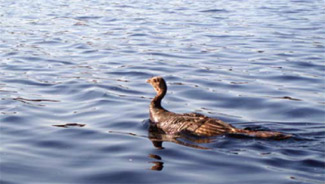 One morning my daughter and her friend were canoeing across Little Tupper Lake in the Whitney Wilderness Area when they saw a large bird land in the water and start swimming. They paddled up to take a closer look and were surprised to see that it was a turkey. Fortunately they had a camera with them and were able to snap a couple of quick shots. I’ve never heard of a turkey swimming. Is this usual behavior? Or was the turkey forced into the water to escape some danger? Donald Hughes, Albany, Albany County

What a remarkable photo. Your daughter and friend were very lucky to witness some behavior that is rarely seen. While wild turkeys can swim for short distances, it is not a preferred mode of travel. These large birds are “built” for walking and running on land. When in danger, running, rather than flying, is their preferred mode of escape. However, turkeys have powerful wings and are capable of rapid, short flights that range from several hundred yards to one mile in length.

The fact that your daughter saw the turkey land in the water confirms to me that this was likely a last resort move on the turkey’s part. Most likely the bird was unexpectedly flushed from its location near the shore by a predator or person, took flight to escape, “ran out of gas” half way across the lake and had no choice but to swim for it. -Michael Schiavone, DEC Wildlife Biologist

Who knew? And here’s another sighting from my neck of the woods: from the Kansas Department of Wildlife and Parks: 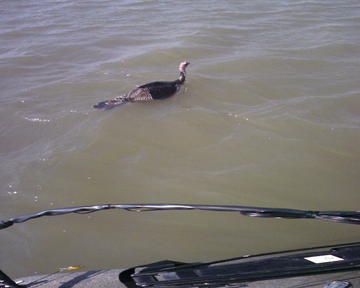 James Trogdon filmed this oddity at Eldorado Reservoir on May 19, 2007. The turkey flew into a cove and landed in the water, swam 300 yards to shore, and walked out.