UPDATE: Feb. 17, 2009, a sad day for Smiley. “After repeated stays of execution during the past two years, the Grand Forks City Council decided Tuesday to pull the switch on the 77-year-old water tower.” The rest of the story here.

UPDATE: Smiley gets a reprieve…On Feb. 2, “Council members spent more than an hour Monday discussing the old tower before voting 4-3 to seek bids to for saving it.”

Scrap metal or cause célèbre? The Grand Forks citizenry is choosing sides over the Smiley issue with the nostaligic facing off against the practical…..on Facebook!? 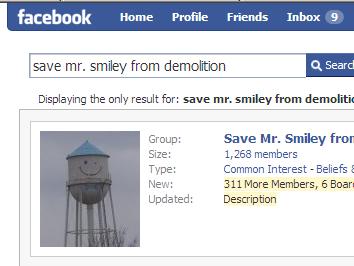 A former Grand Forks resident, created the Facebook group “Save Mr. Smiley from Demolition” in 2006 when the City Council started talking seriously about scrapping the smiler for good.

And it was a quick social networking success. Noted in this article from the Grand Forks Herald,

Within the first two weeks, about 400 members had already signed on. After City Council members indicated on Monday that they favored tearing down Smiley, the group now has more than 1,000 members.

Sounds like a good idea, but… since the issue is really about money, it is a shame that the effort did not include an opportunity to donate. That way, the tower’s fanbase could put money where their smiling mouths are.