For 2010, we’ve gone DIY! All these water-themed Halloween costumes are homemade. This year, use your skills, creativity and ingenuity to fashion a killer look and unforgetable water statement! 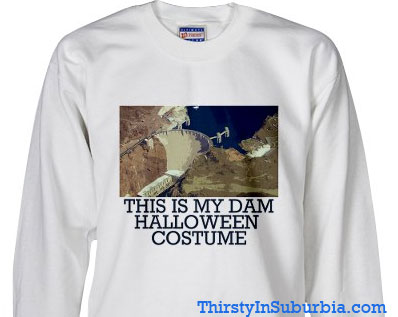 THIS IS MY DAM COSTUME THIS YEAR: Thirsty in Suburbia exclusive! I made this for myself on Cafepress…perfect thing for recession trick or treating around your local Hooverville. (While I was at it, I made a shop so you can get one, too! Yes, I know, it’s expensive…but who can put a price tag on this level of awesomeness? Check out the mug, too! http://www.cafepress.com/thirstyinsuburbia). 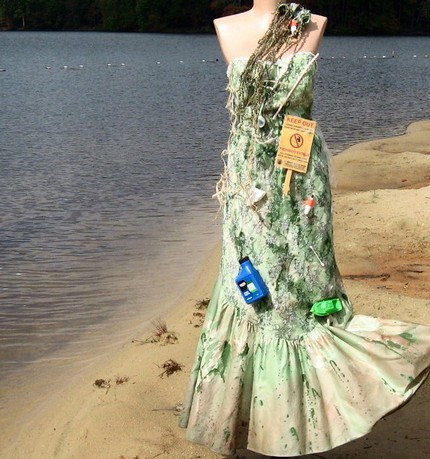 TOUGH YEAR FOR MERMAIDS: This costume won the 2008 Etsy Costume Contest in the Green catagory. Your 2010 interpretation could be even more timely with sad-funny BP references. Find a thrift shop prom dress and get busy! Great way to recycle that old motor oil. Source Link

END_OF_DOCUMENT_TOKEN_TO_BE_REPLACED

Why, it’s not such a repulsive idea really! After all, the toilet and shower drain to the exact same place, and if you’re healthy your urine is sterile. Remember that just one less flush per day could save you in excess of 1,000 gallons of water per year!

Environmental group SOS Mata Atlântica is advancing the idea among Brazilians with a charming PeeSA spot that features people big and small, young and old, human, alien and animal, doing their business while doing their personal hygiene routine. Cute! (But please, don’t follow this up with a yellow-mellow, brown-down public service campaign!)

Via discoblog on discovermagazine.com 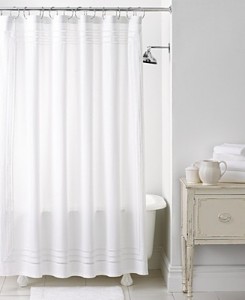 “BEHIND THE SHOWER CURTAIN” SURVEY: America’s Steamy Secrets Reveal What Men and Women Really Think About in the Shower

Who could resist that headline, Water Pik? We were roped right into this promising press release, purporting to take “a peek at what really goes on behind the bathroom’s closed doors.”  Water Pik, Inc., released the findings of a survey that asked 1,000 Americans how they spend their time in the bathroom, including some not-at-all-surprising differences in male and female shower behavior. 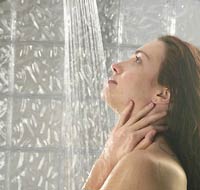 Now, I could have told you this without asking 1000 people, but “Women use shower time to contemplate chores, problems and weight. Men spend their shower time thinking about work, sex and day dreams.” So, women spend about 2 minutes longer in the shower, but that’s just because we’re reviewing our long, arduous list of chores! (I’m not sure how men cover sex and work in a brisk 12 minutes!)

Men and women did agree that low water pressure is the No. 1 bathroom pet peeve, and also agreed that they would rather pay bills than clean the shower.

I for one applaud Water Pik for doing some research that matters! This will allow them to develop useful products to enhance our shower experience. Like, how about a waterproof shower pen tablet, so we gals could jot down all those chores and “to do” lists? 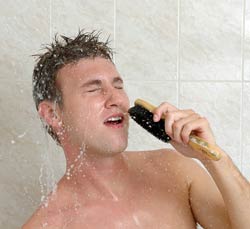 And, now that you know that 25% of us are using the shower spray as a pseudo-microphone, would it be a huge leap to have it function as a real, working mic? That way the entire family could enjoy our wet rendition of “Moon River!”