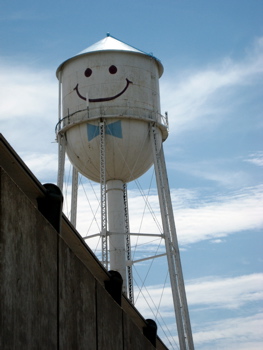 Grand Fork-ers (North Dakota) are ambivalent about the future of their two-sided smiling/winking water tower, despite the fact that it hasn’t held water in years. Now, city leaders are struggling with the rising cost of indecision–about 108% higher in just two years. (Makes that winking seem more like mocking!) Now this is the sort of infrastructure stimulus project that could put a smile on the face of We-The-People. From the Jan. 26, 2009 Grand Forks Herald,

New estimates show it would cost about $396,000 to save the old Grand Forks water tower with a painted smiley face and winking eye.

That would extend its life about 20 years. Demolishing it would cost an estimated $99,000.

The tower’s paint is falling off in large chunks and it has held no water for nearly a decade. It was built nearly 80 years ago.

But for some, it’s a valued symbol. Councilman Doug Christensen has said it’s “like talking about somebody’s cousin.”

The photo is from this post on the Seven Wonders of Grand Forks at The The Blue Skunk Blog (which also includes the fantastic “Sewage Lift Stations named after newspaper columnists.”