On the flip side, doesn’t anyone notice that this sensitive procedure by the LA County Supervisors was creating jobs? How many basement-wage, demoralizing internships will now face the hatchet? My recently-graduated daughter would kill for this entry-level “graphic arts” opportunity! From L.A. Now at the latimesblogs, 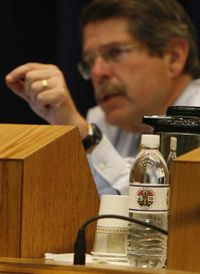 The move came a week after The Times reported that a student worker peeled the labels off individual water bottles, used a computer to print out custom labels and slapped them on. The relabeling of the bottles for the supervisors’ weekly board meetings had been going on for years.

But that struck many people as fiscally wasteful, environmentally unfriendly and politically tone deaf. After all, the supervisors have ordered cuts in recent months that has resulted in the removal of purified water in county hospitals. Workers in some county buildings complained that they did not even have a working drinking fountain.