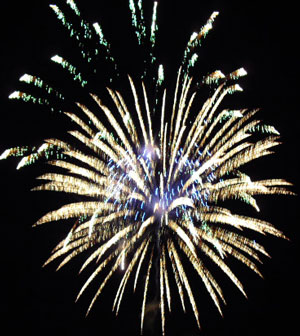 Isn’t it moving to watch those inspiring fireworks displays casting their electric reflection over lakes and waterways? Don’t you love the way they rain down, casting their colors towards…wait a minute. What’s in that stuff raining down into our waterways and seeping into our groundwater?

Most of the fireworks we’ll see during July 4th Independence Day celebrations will contain perchlorate, a powerful oxidizer used to make explosives, rocket fuel, matches, fireworks and other products. Several states have now set limits for its presence in drinking water and the EPA is investigating further regulation of this chemical.

Never fear, though because the American Chemical Society has announced a new chemical formulation that can be used in place of perchlorate in the manufacture of fireworks. In addition to reducing perchlorate use, the new materials burn cleaner, reduce smoke and cut down on the use of heavy metals in fireworks, according to the ACS.  (via WaterTechonline.com)

In a press release (joyfully titled “Green” fireworks may brighten eco-friendly Fourth of July displays in future) the ACS suggests new federal regulations to limit perchlorate in fireworks, because such regulation would overcome fireworks manufacturers’ resistance to using the expensive new formulas which are not yet cost-competitive with perchlorate.

Which is a rich irony, isn’t it, considering the “death to tyranny” origins of this day! (All fireworks, including little tiny sparklers, are already unlawful in my ‘burb, and surprise, opressive heavy fines are involved.)