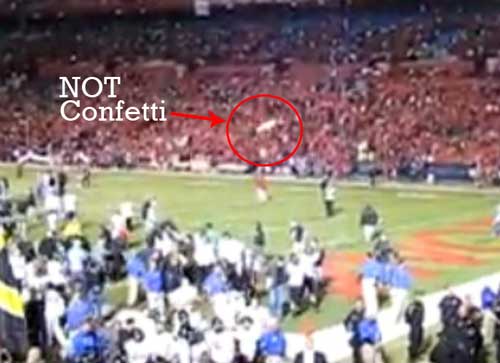 Will this water-bottle violence never end? (Our rule: Three observances equals a certified trend! Here’s the first and the second!)

In the latest installment of water bottle as weapon, irate University of Arizona football fans hurled polyethylene projectiles onto the field in a November 21st post-game bottle-throwing incident that sent an Oregon cheerleader to to the hospital.

Next time, remember, D-E-F-E-N-S-E after the game, too! The normally-cheerful gal lost consciousness after being struck by a full water bottle and was treated and released from the University Medical Center in Tucson.

“As the team was coming in, they were getting bombarded with water bottles, batteries, and various other items coming out of the stands,” Giansante said. “We were yelling at everybody to keep their heads up, but one got through and hit Katelynn in the head. All the kids (on the cheerleading team) are scared, but hopefully she’ll be OK.”