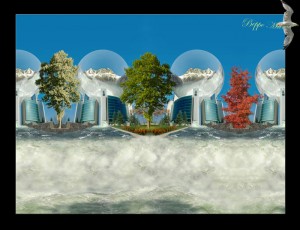 Who places the greatest faith in the ultimate power of science? All the non-scientists, of course! This is why many people don’t worry too much about climate change, water scarcity, fossil fuels, or whatever. Because deep down, we’re SURE that SCIENCE will eventually crack the code with a huge discovery that will fix everything. (Just a matter of money and desperation, correct?)

The right brainers of the world might understand this, but the science-ignorant populace (myself included) have a nagging stupid question: Why can’t we just manufacture some water, cooking up a new mashup of hydrogen and oxygen that will spill forth plentiful bounty from the advanced process water factory?

For the answer, we turn to Why can’t we manufacture water? at howstuffworks.com.

Water is made of two hydrogen atoms attached to an oxygen atom. This seems like pretty basic chemistry, so why don’t we just smash them together and solve the world­’s water ills? Theoretically, this is possible, but it would be an extrem­ely dangerous process, too.

To create water, oxygen and hydrogen atoms must be present. Mixing them together doesn’t help; you’re still left with just separate hydrogen and oxygen atoms. The orbits of each atom’s electrons must become linked, and to do that we must have a sudden burst of energy to get these shy things to hook up.

­Since hydrogen is extremely flammable and oxygen supports combustion, it wouldn’t take much to create this force. Pretty much all we need is a spark — not even a flame — and boom! We’ve got water. The hydrogen and oxygen atoms’ electrons’ orbits have been conjoined.

But we also have an explosion and — if our experiment was big enough, a deadly one. The ill-fated blimp, the Hindenburg, was filled with hydrogen to keep it afloat. As it approached New Jersey on May 6, 1937, to land after a trans-Atlantic voyage, static electricity (or an act of sabotage, according to some) caused the hydrogen to spark. When mixed with the ambient oxygen in the air, the hydrogen exploded, enveloping the Hindenburg in a ball of fire that completely destroyed the ship within half a minute.

There was, however, also a lot of water created by this explosion.

STOP RIGHT HERE A MOMENT. Naive question: precision-minded scientists, haven’t you assured us that there is the same amount of water on earth today as there was when the earth was formed? Did the Hindenburg crash, in fact, “create” water? Annnyyywaaayyy….

To create enough drinking water to sustain the global population, a very dangerous and incredibly large-scale process would be required. Still, over a century ago the thought ­of an internal combustion engine — with its controlled repeated explosions — seemed dangerously mad. And as water becomes scarcer, the process of joining hydrogen atoms to oxygen atoms may become more attractive than it is currently. Necessity, after all, is the mother of invention.