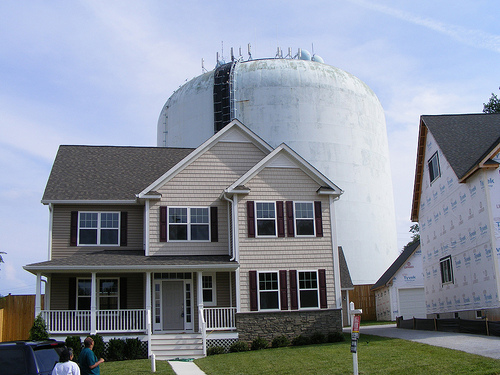 Dan Reed from Just Up the Pike, an excellent Montgomery County, Maryland blog, profiles this available-now dream home. (Perhaps this what is meant by the phrase “wet dream?” No, don’t think so!)

3 BR 3.5 BA Colonial, near schools, shopping and 495. Potential for waterfront access (comes with two of every animal just in case). $699k. 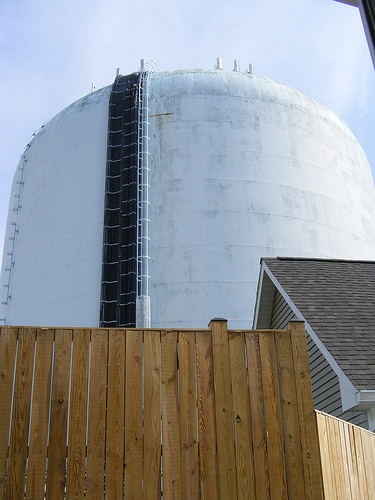 How did such a house come to be built with such horrible siting? Reed explains how infill development can be an appealing concept on paper, but a failure on the ground:

It’s a truly attractive house, solidly built and well laid-out, not to mention in a fairly decent location. Schools, shopping and the Forest Glen metro are all more or less within walking distance. But the siting of these six houses, in the shadow of a hulking water tower and hard up against the back of a strip mall, is less than ideal. This project illustrates many of the challenges of infill development, namely what to do with inflexible site conditions. You can’t move the water tower. The shopping center is likely decades away from being redeveloped. And the property is zoned for single-family homes. You have to make the three work together. I can’t say that happened here, though I’m not sure if it’s even possible.

Here’s hoping that the family who buys this house has a sense of humor, and furthermore that the water tower is well-sealed. 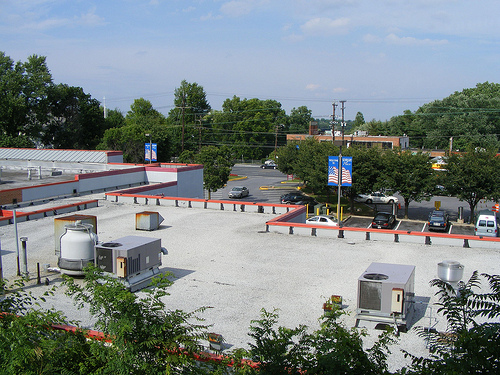 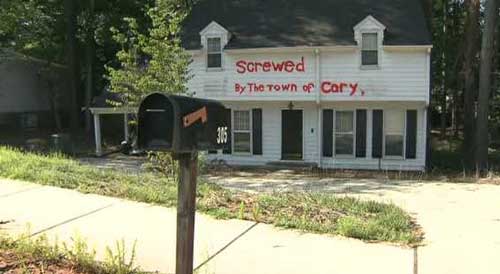 Ya’lled be mad, too, if the city widened a road and turned your front yard into a storm-powered waterfall headed straight for your front door. Still, it ain’t been easy for the Cary, North Carolina town leaders to appease the annoyed Mr. Bowden. So he’s taken his complaint to the streets with an in-your-face message right on the front of his house. From wral.com (the video news report is embedded below), Mr. Bowden… 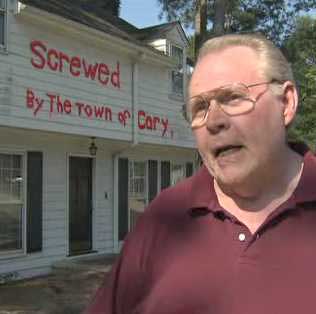 …claims a recent widening project on Maynard Road has left his once-arboreal yard void of trees and with a steep slope that funnels rain water into his home.

Bowden, who’s lived in the house since 1992, says he has complained for a year now to the town about water damage underneath his house but was told the drainage issue is with his gutters.

“You don’t have to be an electrical engineer or a construction engineer to know water runs downhill,” he said.

That stinks! But before you get caught up a wellspring of sympathy, there’s another side to the story. Seems the problem didn’t start with the widening (although it did worsen.) And he doesn’t want the problem fixed. He wants no less than a generous taxpayer-funded buyout. That is, top dollar for a so-so property in a depressed real estate market.

Assistant Town Manager Mike Bajorek says he understands Bowden’s frustration but says it’s also frustrating for the town. “We have gone to him and said we have a design that would help resolve (the drainage issue),” Bajorek said. “He said, ‘No, stay off my property. I want you to buy my house.”

Bajorek said the town has purchased houses with drainage problems when there was no possible solution but that it is not willing, at this point, to spend tax money to buy the house.

Bowden told the town that the drainage issue was a problem for years before the widening project when the state Department of Transportation put an overlay on Maynard Road, Bajorek said.

“We have been working on this project for several years,” he said. “We have a fix in place. We’re just waiting for Mr. Bowden to give us the go ahead to install that.”

Good try, Dave, but haven’t you learned that you can’t fight city hall? While you stubbornly refuse to remove the message, the town is citing you for violation of their sign ordinance, with big fines that escalate the longer the eyesore remains–$100 for the first day, $250 for the second and $500 for each day afterward. That’s gonna add up to a surprisingly expensive gripe! 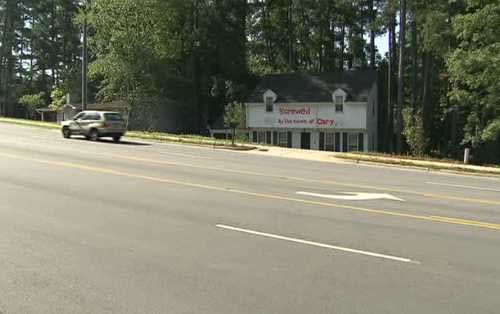