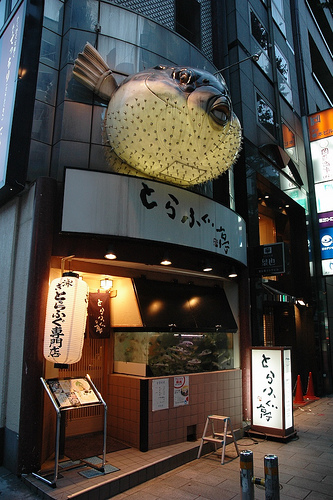 For those who like to live dangerously, the pricey Japanese treat Fugu (Puffer fish or Blow fish) has achieved an almost mythological status in adventurous dining. Eating Fugu is synonymous with risk taking because if incorrectly prepared, even a single bite could mean certain death.

So you would think that the introduction of non-poisonous, commercially farmed fugu would be welcome news in the puffer-partaking community, right? Well, wrong. After all, what fun is that? Do you think a squeaky-clean Puffer fish would amaze and impress your friends?

But many fugu chefs – who are traditionally bound to commit ritual suicide with their own fish knife should one of their customers expire after eating one of their meals – said they preferred to take their chances with the potentially deadly wild varieties.

“It’s a very tasty fish, but that’s not the only reason people choose to go to a fugu restaurant,” said Shinichi Ueshima, the chef at the Dote fugu restaurant in Yokohama.

“It’s obviously more than a little exciting to go to a restaurant knowing that it might be the last meal that you ever eat,” he said. “Where is the enjoyment in eating something that has no risk in it?” 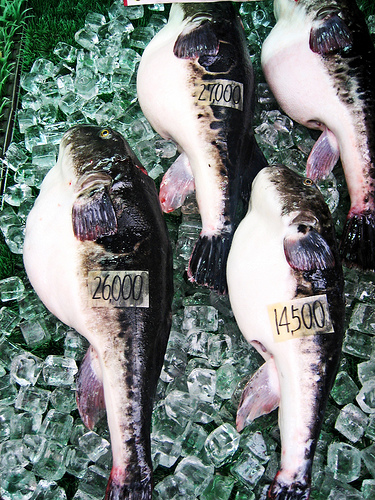 At Osaka: Whole fugu for sale at Kuromon Ichiba for up to 27,000 yen (about $270) from A Culinary Photo Journal on Flickr

Certainly, the Fugu chefs themselves have much invested in the toxic thrill of the classic experience. For 50 years, only specially licensed elite chefs are permitted to prepare and sell fugu to the public. Getting there involves a 3-year apprenticeship culminating in rigorous testing that only 35% of applicants pass. (There’s no room for a slight mistake in this particular occupation!)

That should make you feel better about putting it all on the line for the ultimate extreme meal, especially since the potent neurotoxin in question, Tetrodoxin, Tetrodotoxin (Toxin typo! See comments) is not affected by cooking and works by rapidly paralyzing the nerves and preventing the lungs and other body systems from working. There is no antidote and death can occur within minutes. (It does not cross the blood-brain barrier so the victim remains fully conscious.)

Thrilling, right? But not a cheap thrill…Fugu can range anywhere from US$30 up to a $200 full course meal.

Photos: Whole Fugu from A Culinary Photo Journal on Flickr