Stanley Drescher was a man with a dream and a vision. His vision was one in which Flagler Beach, Florida’s plain-Jane water tower proudly displayed the town’s moniker for townspeople and tourists alike. Through tireless fundraising, hard work, indifferent city leadership, red tape and poetry (yes, poetry!) Stanley’s dream is about to become reality. From msnbc.com,

Drescher — whose love of the tower has moved him to write poems about it — raised the money just five months after announcing his desire to see the oceanside structure bear the city’s name. Most of the funds came from selling commemorative plaques about the fund drive to businesses, which enlisted sponsors who paid $100 to have their names engraved on the plaques, too. The plaques state, in part: “The tower tanks you.” 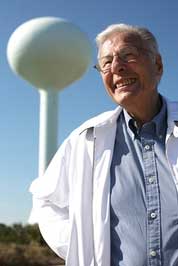 Why would this goal be so difficult to achieve? How did a sense of public duty turn into taking a load of public doody?

Drumming up support for a project so close to his heart wasn’t easy, Drescher said. “It was very, very difficult,” he said. “It didn’t happen overnight.”

Community organizations weren’t interested in hearing his pitch for the tower on the city’s south side, he said. And an attempt to raise the money through the sales of vanity license plates failed.

City Commissioners wouldn’t accept the money unless donations were tax-deductible and came from a nonprofit group. They wouldn’t match the money Drescher raised. The reaction from city commissioners was a surprise, Drescher said. “I never dreamed they would turn me down,” he said. “They put a lot of restrictions on me.”

Drescher’s love of poetry came into play in the campaign as he authored a number of poems about his trials, even reading some of them in the public comment portions of city and county meetings. From his composition, “The Beginning of a Quest”

We walked in all directions/’Til we got swollen feet/And all the while determined/Not to accept defeat.”

With victory at hand, Mr. Drescher notes “I have to find another project. Maybe I’ll form a poet’s society.”

Super! Can I join? Here’s my first contribution: I think that I shall never see/A tower with the town’s marquee… 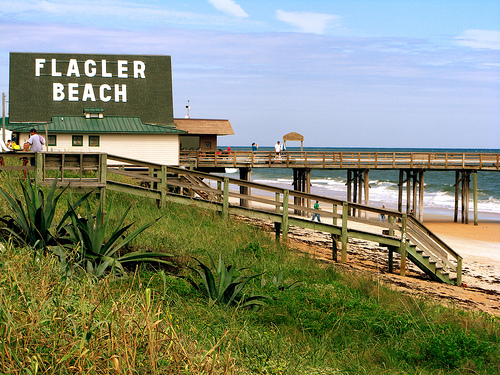