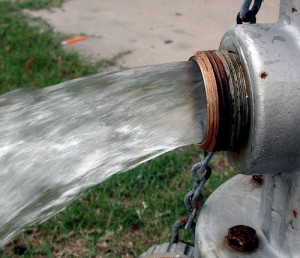 In Wareham, Massachusetts, vandals opened a fire hydrant in a secluded area Sunday night and flushed about 2 million gallons of water out of the Wareham water system before the breach was discovered,

We’re all numb to big numbers these days, but think about it. 2 MILLION GALLONS. That’s equivalent to 800,000 toilet flushes, or enough water to cover generous toilet flushing for the entire Wareham population for 5 days. (assuming no one pees in the shower.) That’s enough water to fill 40,000 bathtubs, enough for me and my immediate family to luxuriously soak up to our chin-lines every day for more than 20 years.

The story on SouthCoastToday.com notes,

[Michael] Martin [water system department superintendent] said the department’s monitoring system indicated that the hydrant, in an unbuilt subdivision, was opened at 10:37 p.m. Water poured out at a rate of about 3,500 gallons per minute until technicians were alerted by an automated control system that the water towers had dropped to an alarm level.

“The control and alarm system worked exactly as designed,” Martin said. “As soon as the alarm went off, our technician was in the office by 4:15.”

As the water level in the towers dropped, the automated system started individual wells at pre-programmed levels to meet demand. By the time the towers hit the alarm set point, all seven wells were running as designed.

Hmmmm. If the system worked exactly as designed, perhaps it’s time for some design refinements! We’d like to believe that a sudden, sustained 3,500 gallons per minute loss might trigger some sort of an alert, well before the point where critical supply levels reached the emergency stage.

Regardless, someone’s going to pay for this not-so-funny prank.

Martin said the incident was reported to the Massachusetts Department of Environmental Protection and the Wareham Police, who are conducting a criminal investigation. The water department also issued an advisory via its Reverse 911 system regarding the discolored water.

Hydrant shenanigans are not uncommon, and I’m reminded of this story from a few years back. From chicagoclout.com, a water department worker said,

On July 8, 2007 some children from Mayor Daley’s 27th and State Projects opened fire hydrants and splashed water into the cars passing by with open windows, immediately flooding the cars. When attempting to shut down these hydrants, I always attempt to shut down without an incident. This kid pictured, pulled out some “Grills”, put them on his front teeth, and sat on the hydrant. I called for the Chicago Police for back-up and the large crowd dispersed. This Chicago fire hydrant need a “Custodian” safety device to stop millions of gallons of wasted water.