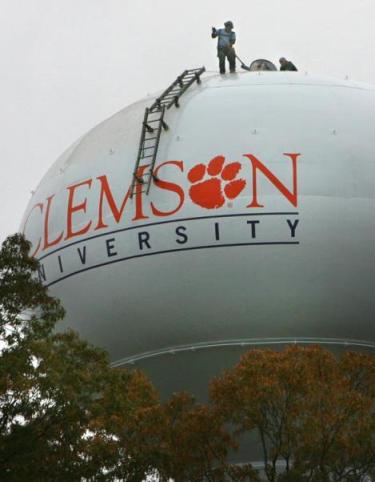 Who is Clemson University’s mystery water tower decoration donor? No one seems to know, but that person obviously saw an opportunity emerging as a humdrum water tower was scheduled for routine maintenance. Rather than just repainting the tower in its usual white, “Mr. Mystery Bucks” shelled out the cash to splash the University’s orange and purple logo proudly across the tank.

Good idea, “Mystery Bucks!” That’s WAY better than a boring commemorative plaque hanging in a remote lobby or hallway. You don’t have to wonder where the money went, or how it was spent!

Via independentmail.com, Clemson University spokesman John Gouch said he was not able to determine Monday who paid for painting the university’s logo on the tower in Oconee County, South Carolina. The 300,000-gallon tower took about a month to sandblast and repaint.  It took 300 gallons of paint including “two gallons of Tiger Purple.”

With the logo added to the structure, Gouch said “the tower really stands out now.”

Our conspiracy theory? Hmmmm. We suspect that the management at Watercrunch must have had some hand in this, given their affinity for water towers and fierce devotion to Clemson.

Photo via independentmail.com in Anderson, SC.