Entrepreneurship springs eternal when it comes to bottled water, so we’re only slightly surprised that it is now springing from the Korean Demilitarized Zone. That’s right, DMZ water, extracted from that narrow strip that is one of the most heavily guarded plots of land in the world. From the Guardian UK, 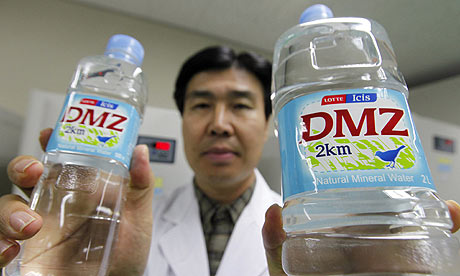 South Korea's newest water is bottled near the Demilitarised Zone buffer that has divided the Korean peninsula since 1953. Photograph: LEE JAE-WON/REUTERS

For more than half a century the Demilitarised Zone, the buffer between North and South Korea, has only yielded crops of razor-wire fences, landmines, watchtowers, and squadrons of heavily armed soldiers – until three months ago when the Lotte Chilsung Beverage Co began selling DMZ 2km water, from a spring that flows under the strip. The bottling plant is safely just within South Korean territory but the origin of the water is clear: along with the outline of a bird, the label boasts the legend DMZ. Lee Sang-hyo, a spokesman for the company, explained: “We decided on water from the DMZ because it’s different and the environment there is untouched, so many people think it’s clean.” “Getting the water is not dangerous at all. We worked it all out with the military,” Lee said.

The news tempts us to brainstorm some possible marketing slogans for the DMZ brand (before Watercrunch beats us to the punch!)