You might be disgusted by this story. But I’m here to defend the recently-maligned codepods and rotifers. They don’t deserve this! They’re not disgusting, they’re misunderstood! You don’t believe me? Just bear with me for a minute.

A story that caused quite a stir this week; from the April 23, 2009 Hartford Courant (Connecticut):

After the discovery of microscopic organisms called copepods and rotifers in a Bloomfield home earlier this week, the MDC advised many of its customers to boil their water for one minute before consuming it.

Bloomfield resident Jim Pines found what looked like “tiny polliwogs” about half the size of the tip of a pen on Monday. Hundreds of them appeared to be swimming in a sample an MDC worker took from Pines’ filter Tuesday.

“The guy’s hair stood up on his arms and he said, ‘Stop drinking the water,'” Pines said. “It was completely disgusting. We were drinking them, washing out clothes in them, and it was just completely nasty.”.

Here’s why I ask that you don’t rush to judgement! These codepods come from a family of do-gooder tiny crustaceans that stand ready to GIVE THEIR LIVES for YOUR common good! Are you aware that they’re soliders in the war on terrorism? That they stand (well, swim, really) prepared to defend an attack on your water supply?!

I visited a municipal water quality lab a couple years ago, and one of the things I vividly remember is the surprising sight of tankfuls of CODEPODS. Well, they were water fleas, actually–daphnia to be specific. These little creatures are kept on hand for possible use as bioindicators–species used to monitor the health of an environment or ecosystem. (Somewhat like canaries, which were once carried into mines to detect poison gasses and warn miners to get out.) 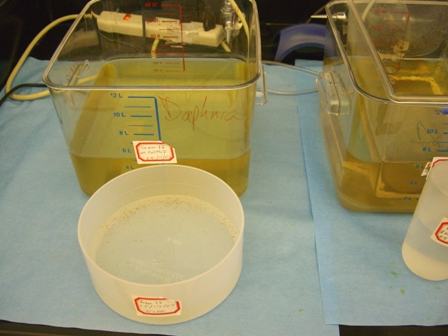 In the wake of heightened security concerns after 9-11, an at-the-ready supply of these tiny animals is one of many security procedures that have been put into place. The lab has a ripe, ready-to-die batch available to go at all times in the event of an emergency, as well as other batches “on deck” in various stages of development. Funny, this lab was about as advanced and sophisticated as it gets, but these little guys are still one of the fastest ways to detect toxins and poisons in a water supply.

Not that I’m recommending that the folks in Connecticut drink the codepod-filled water, but the fact that they’re swimming around in there should be considered a positive sign!