Soon, will your airfare include an additional fee for “holding it?” Maybe, now that Japan’s All Nippon Airways has started asking passengers to go to the toilet before boarding because…they want to reduce carbon emissions! (Just think of the greenwashing potential…ANA: we’re working hard to address Carbon Leak issues!) From The Daily Mail (UK): 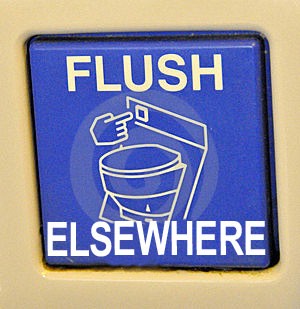 All Nippon Airways (ANA) claims that empty bladders mean lighter passengers, a lighter aircraft and thus lower fuel use. Airline staff will be present at boarding gates in terminals to ask passengers waiting to fly to relieve themselves before boarding, The Independent reported.

ANA hopes the weight saved will lead to a five-tonne reduction in carbon emissions over the course of 30 days. The airline began the policy on October 1, according to Japan’s NHK television.

Although it is intended as an experiment lasting one month and 42 flights, the trial may be extended if it is well-received by passengers and if results are positive. Based on an average human bladder capacity of 15oz, if 150 passengers relieved themselves on board an aircraft, this would amount to 63.7kg of waste.

Think about it! 63.7kg, (which is 140 lbs) means that All Nippon could transport an additional paying passenger whose weight could be totally offset by all that urine that stays on the ground! That’s an idea that could go right to the bottom-line! (tee hee)

Intriguing, but let’s look at the total picture, that of 150 flushes at both ends of the terminal, or approximately 360 gallons of water assuming a very-efficient 1.2 gallons per flush. We’ll all be stamping our carbon feet either way; it’s simply a matter of who will pay for it. Our policy at Thirsty in Suburbia? “Go where you wanna go, do what you need to do.”