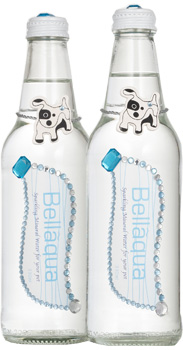 “Some people love it, some people hate it and think we’re mad but we just love our dogs,” Pets Palace spokeswoman Diane Costa said. “I don’t have children and my four dogs are like children to me so I don’t mind spending money on them.”

Yes, Dianne, we really do understand! But you should know that most of us would never buy our children water (or anything else I can think of) in a handmade, jewel-encrusted bottle!

While are humans tightening belts during the credit crunch, it seems money is no object to certain favoured furry friends, The Daily Telegraph reports.

And if you think crystal-jugged mineral water is where it ends at the Pet Palace, you’d be wrong.

Ms Costa said she had spent more than $2000 on clothing for her dogs Lulu, Honey, Coco and Annie and would not think twice about food and water.

“Pets really are one of the family. We treat them and spoil them,” she said.

“It’s just as much fun to put a dog in a cute sweatshirt as it is a child so why not offer them a decent drink every now and then.

“As humans we drink bottled water and every now and then it feels good to give them bottle plus the bottles are cool.” 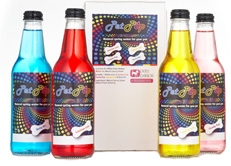