We’re workin’ hard to educate the general public on nuances in the world of water language! The Visual Water Dictionary attempts to cut confusion on water words and terminology with easy visual references. (Thanks to Kristy Henry for suggesting today’s entry!)

Thirsty in Suburbia desirability grade: B (points deducted for general grossness.)
This Mixed Liquor looks like this: 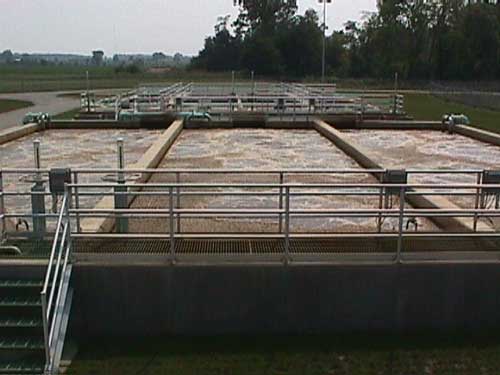 2. Alcoholic beverages which contain alcoholic liquids that are distilled, not fermented, and one or more other ingredients. Note: may or may not contain water.

Thirsty in Suburbia desirability grade: A (dependent on individual use/misuse).
This Mixed Liquor looks like this: 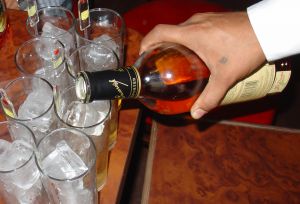 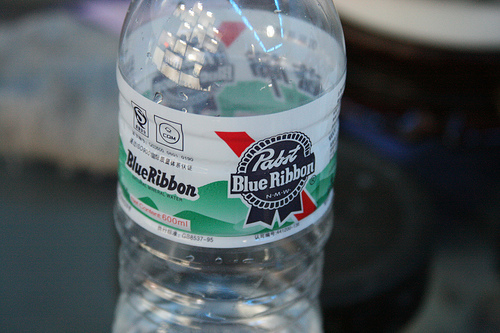 With so many marketing short-cut brand extensions out there, extensions between bottled water and other estabished beverage brands is a natural, but Pabst Blue Ribbon water is a concept I can’t quite fathom. Flickr user oldtasty picked this one up in Jingdezhen, China and reports it’s “definitely better tasting than the beer from which the brand name was appropriated.”

Then, there’s Smirnoff Source. I’ll bet the concept looked white-hot on all the MBA’s powerpoints, but premium bottled water with alcohol never quite caught fire in the U.S. In the summer of 2007, celebs (like the oft intoxicated Paula Abdul) were seen swigging Smirnoff Source, a premium malt beverage with 3.5 percent alcohol.  It was marketed as an ultra-premium alternative to light beer, which likely looked good on paper, but ultimately idiotic on TMZ.

Why bother when we already have alcoholic water–it’s called Vodka. Oddly enough, the satire about the product actually preceded the product itself. As seen two years ago at http://www.bestweekever.tv/2007/01/09/ad-wizards-official-vodka-of-the-lohanvolution/ 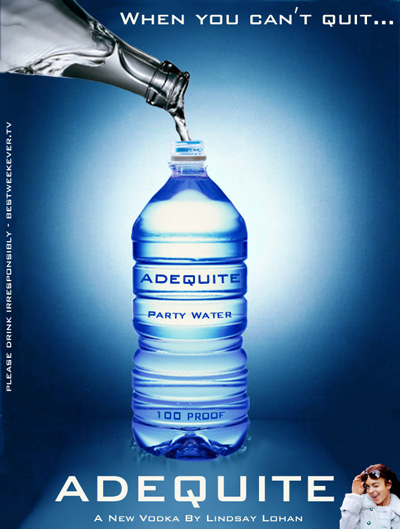 The bottled water industry is mad as hell and is not going to take it anymore. The Independent (UK) features a detailed story by Martin Hickman on their strategy for stopping the sales slide: Troubled waters: Why we fell out of love with bottled water (and how the industry plans to win us back)

Among the huge amount of information in the article is this tidbit:

Admittedly, carbon labelling is in its infancy, but the work done so far suggests that other soft drinks have a carbon footprint up to 10 times higher than bottled water. Danone, which has lightweighted its bottles and uses the train in France, calculates that production of one litre of Evian emits 198 grams of carbon dioxide.

When Tesco checked the Co2 of its orange juice, it found a litre cost 1,040 grams. Even the environmentally friendly Adnams brewery in Suffolk cannot reduce the Co2 of its East Green bitter below 864 grams.

Oh my, could it be we’re seeing a pattern? It’s not clean, healthy bottled water, but alcohol, that is the real villian in this story! And OJ is the real killer, after all!

Research has found that it costs less to quench your thirst with alcohol than bottled water at leading supermarkets. Discounted own-brand alcohol is sold for as little as 23p per can, according to the drink and drug charity Addaction. This research comes on the eve of Government plans to tackle binge drinking. 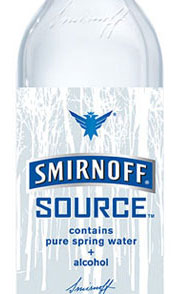 I wonder where this product fits in the value proposition?

Does this mean that water is ridiculously expensive or that booze is incredibly cheap? Well, both. Competition among shops and supermarkets has led to alcohol prices that average 8% less than the recommended retail price. Some items, especially generic “value brands” are as much as 40% below retail. And, the research found that when alcohol is considered as a proportion of income, it is almost 70% more affordable today than it was 1980.

So go ahead and cry in your beer, just don’t weep in the water.