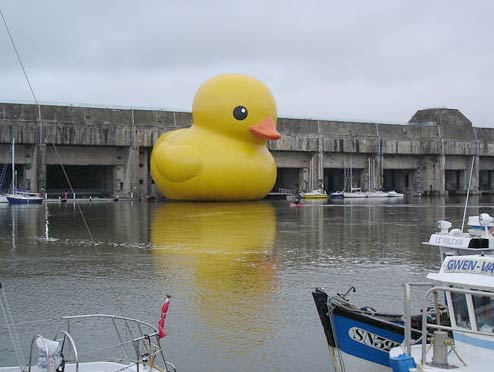 Some outside-the-tub thinking: I found this HUGE fella who’s cute, yellow, and chubby! The artist Florentijn Hofman, well known in his native Holland and throughout Europe, created an actual 100-foot long rubber ducky for ‘Loire Estuary 2007,’ an outdoor contemporary art exhibition in France

OK, so here’s my million-dollar idea©: WHY can’t we put this guy in touch with a group working on tidal energy generation? How cool would it be to have have hundreds of these bobbing in the sea, generating clean renewable power while delighting the populace? How ’bout that, Earth Day celebrants? 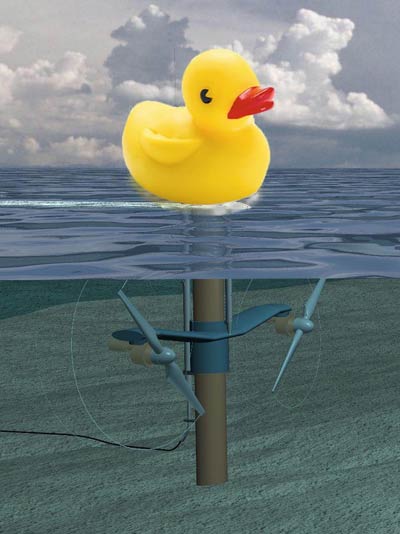 Sustainable awesomeness. Just another reason why science and art should knock heads now and then!

But I digress. Here’s a charming description of the work from the artist’s website

A yellow spot on the horizon slowly approaches the coast. People have gatherd and watch in amazement as a giant yellow Rubber Duck approaches. The spectators are greeted by the duck, which slowly nods its head. The Rubber Duck knows no frontiers, it doesn’t discriminate people and doesn’t have a political connotation. The friendly, floating Rubber Duck has healing properties: it can relieve mondial tensions as well as define them. The rubber duck is soft, friendly and suitable for all ages! 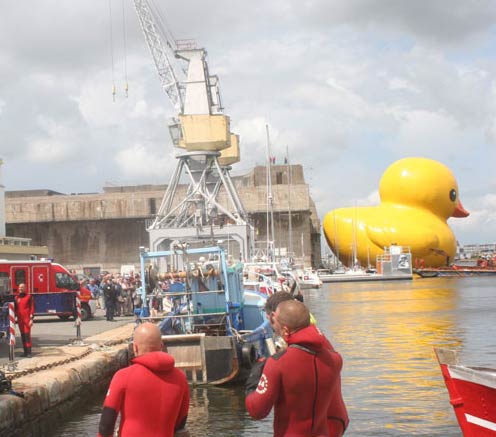 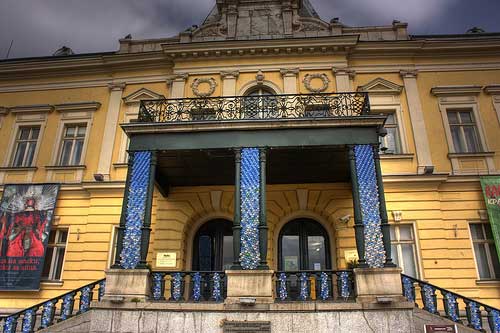 This installation on the facade of the National Gallery of Bulgaria was short-lived but striking. For just over two weeks, from March 7-24, 2009, the display created by the Bulgarian artist Stephan Simov no doubt inspired many double-takes on Battenberg Square. (Since 1946, after the abolition of the monarchy, the National Gallery has occupied the former royal palace of Bulgaria in the capital city of Sofia.) 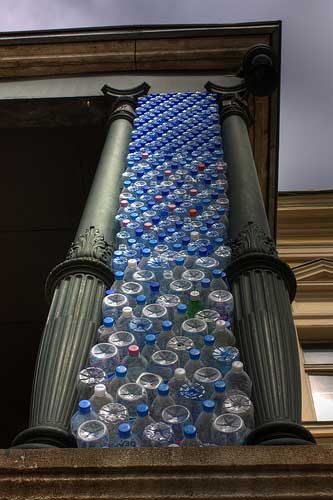 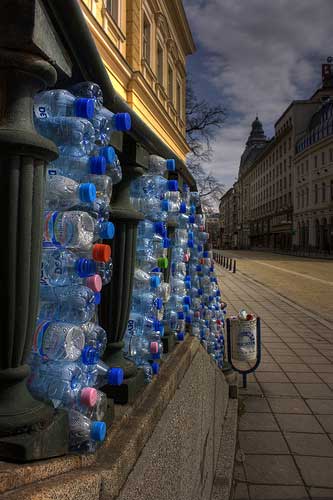 Thanks, Klearchos Kapoutsis on Flickr, for sharing these beautiful photos! 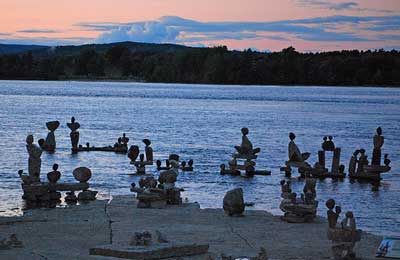 How would it feel to spend months creating this, only to see it destroyed by the natural shifts of the seasons? To the artist John Ceprano, it would feel perfectly right that the works are created by man and dismantled by nature.

Every spring and summer since 1986, John Ceprano has created these stunning sculptures rising out of the river bed of the Ottawa River at Remic Rapids in Canada. The sculptures are constructed entirely by hand using heavily fossilized, color-laden rock that is unique to the region. Before the next spring arrives, the sculptures collapse and vanish in the harsh ice and storms of the cold Canadian winter. 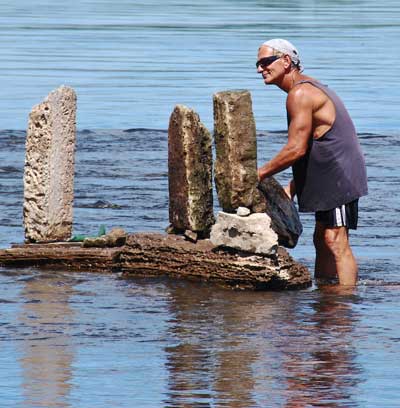 And the next spring he begins again. What has motivated him to rebuild and re-create each year for more than two decades? In his own words,

…At that time, I began Transcendental Meditation providing a perception of balance in all things, natural and man made. It is also the guiding process for the rock sculptures: BALANCE, HARMONY AND PEACE. The TAO balances and harmonizes the space so that everything fits together naturally, as if being there forever. Meanwhile, the Buddhist principles allow the “letting go” each winter season when the sculptures are dismantled by the river and ice. 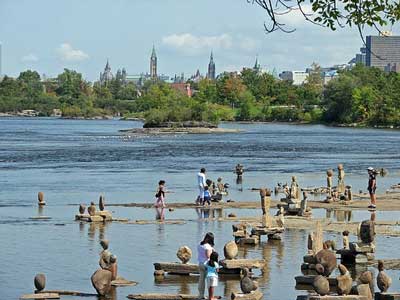 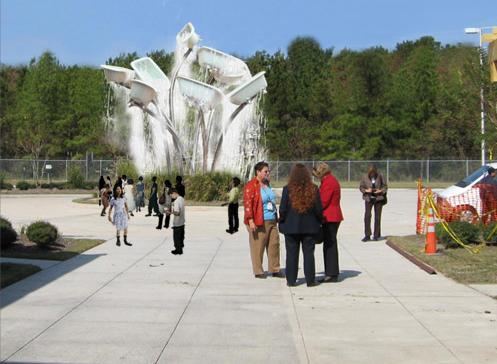 When Houston’s Water Museum and Education Center opens in the Fall of 2009, visitors will be greeted with one splashy Texas-worthy monument to mandatory public arts funding.

This $500,000 “bathtub bouquet” (conceptual drawing shown here) will be installed at the outer traffic circle of the new WaterWorks facility and is designed with a hidden water recycling system (thank God for that). Not that it has to “represent” or “mean” anything, but I wonder what the artsy “talking points” will be about the work’s message… there’s plenty of water here, fill ‘er up and splash ‘er out! Whatever, I admit it…I really like it, there’s something irresistable about it.

As reported on www.chron.com, the Houston Chronicle’s online site,

Its title, Tubbs, is a pun and tribute to country-music legend Ernest Tubb. Its creator, Philadelphia-based Donald Lipski, is an art-world legend, with work in more than two dozen major museums and a hefty portfolio of public art commissions.

Funded by an ordinance that sets aside 1.75 percent of city capital-improvement project budgets for art, Tubbs is one of eight public commissions set for completion in 2009, say officials with the nonprofit agency charged with managing the city’s art collection.

“We want to have the country’s next great civic art program,” said Jonathon Glus, CEO of the Houston Arts Alliance. “Houston is poised for it.”

Lipski landed the Public Works and Engineering Department commission by answering an HAA open call for artists in June 2007. A five-member panel of department representatives, art professionals and stakeholders met twice — first to review submissions and select three finalists, then to interview the finalists, review their designs and select the artist.

Although the commission was originally budgeted for $350,000, public-works officials agreed to add $150,000 after “reviewing the scale and potential of the Water Museum commission.” That enabled HAA to negotiate a $500,000 contract with Lipski in June, according to HAA’s civic art capital report for fiscal 2008. 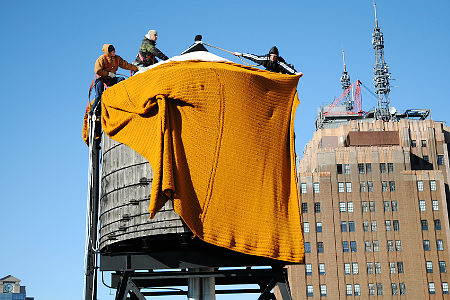 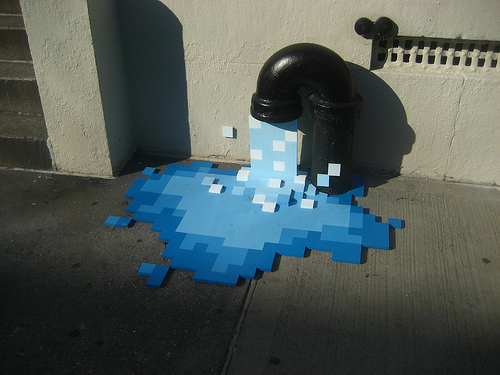 What an unexpected delight for those who chanced upon it; as seen in New York City near NYU’s Barney Building: an anonymous street artist crafted these pixel drops flowing forth from this formerly plain and forgettable pipe. And sadly, ruined by graffiti a short time after this photo was taken by Flickr-er nickgraywfu’s friend Annamarie Tendler. I almost expect Super Mario to zip in and take a bouncing leap over it. 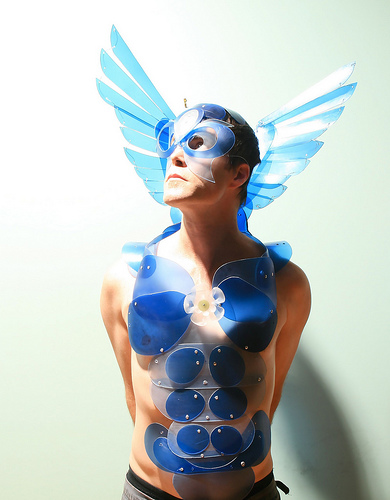 Bruce Voyce is a sculptor from Vancouver B.C., Canada and in his Water Project, “the office water bottle is being transformed into a fantastic interactive world of wonder.” I am speechless. Many more fantastic variations are found at this brilliantly titled Flickr page, Excessorize. 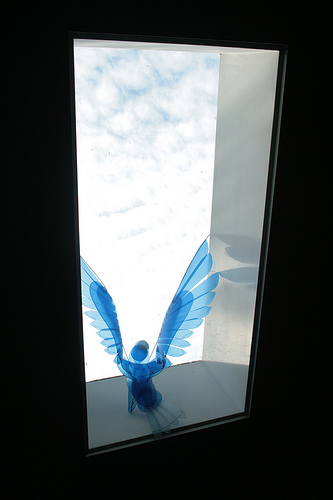 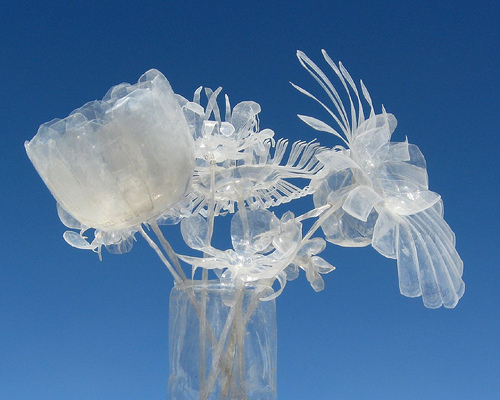 Behold the beauty that lies in your waste bin. These ethereal blooms are made from water bottles by RodPujante. Amazingly, he uses no glue or fasteners, just the repurposed bottles. View many more stunning photos on the Flicker page of Playa Moth, here. 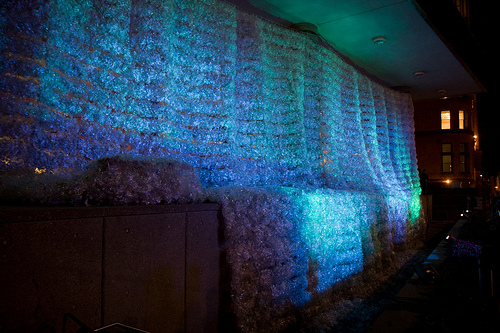 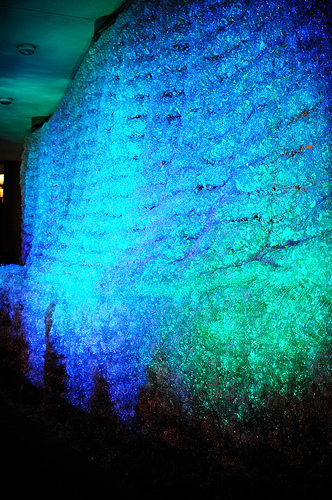