Now who could be opposed to reuse and recycling? Go green, woo hoo! Just don’t go green where you , uh, you know, go!

Is it a tad enviro-ugly if your neighbor reuses an out-to-pasture  toilet for a whimsical planter? Surely there’s a law! A code? Something? A regulatory loophole somewhere that would prevent such a tasteless display in your well-manicured suburban oasis?

The complex legal issues surrounding toilet planters were covered in a recent post to “Answer Man” in Rochester, Minnesota’s PostBulletin.com…and we don’t think the questioner will be happy with the lawyer-approved answer!

Dear Answer Man, is it legal to plant flowers in an old toilet and keep it in your front yard in this lovely city of ours? A neighbor recently did this and it doesn’t do much to enhance the otherwise nice, well-kept neighborhood. In fact, I cringe every day when I drive by it. I could see maybe in the backyard or at the end of a long, dirt road, but in the middle of northwest Rochester? Please help me to clear the air.

I’m always happy to flush out the truth. To help with the flushing, I called City Attorney Terry Adkins, who said it was the very first time in his career that he’s heard this question.

There’s no ordinance to prohibit the use of a toilet as a flower pot, but a few lines in the city housing code get close to the mark. “The open area of your premises must be kept in a reasonably clean and neat condition, including the removal of all inoperable machines, appliances, fixtures and equipment,” the code says.

“I suppose someone could make the argument that a toilet out there is inoperable” and thus violates the code, Terry says. But then he called the city building safety department. Amazingly, “they have received some complaints (historically) and have taken the position that it’s not a violation of the ordinance,” reasoning that the “fixture” in this case is “operable” because it’s loaded with plants.

If it wasn’t used as a planter and was simply in the front yard, presented as a Duchampian work of art, it presumably would be illegal. At least that’s the response of the city.

And in my idyllic suburbia? I come down squarely in favor of toilet planters; in fact, I have one of my own, though please note that my interpretation uses only the tank and is displayed privately in my backyard. (Happily filled with impatiens right now.) 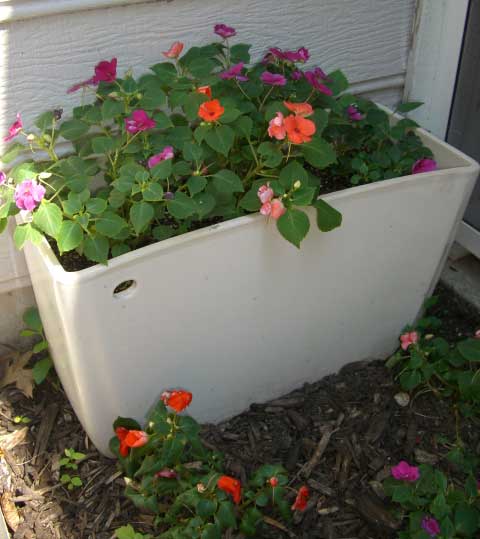 I’ll bet the toilet gardener in question imagines they are quite creative, but the idea is not unique; a quick search on Flickr produces a ton of dirt on the topic!

I'm Getting You a Gift for Drinking Water Week!

Nice to know LA's got balls

Occupy Water Tower: The Revel's in the Details