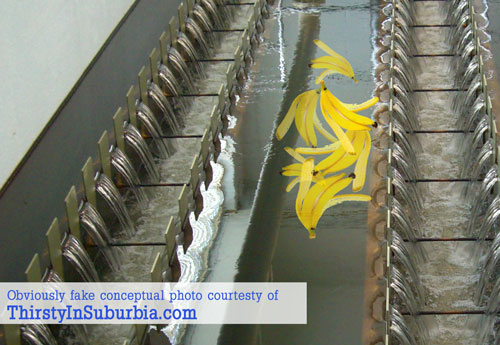 You’re already saving those rotten bananas because you’re going to make banana bread out of them. Sure you are. Now, you have a reason to hold on to the peel, too.

There’s been a new discovery in the wacky, unpredictable world of water science: the power of the peel. Linda B. passes along this news flash from waterandwastewater.com:

A group of scientists from Brazil have discovered that minced Banana peels rather quickly and efficiently removed toxic metals from wastewater. In fact the method was found to be more effective than conventional water treatment plans. Moreover the same bunch of peels can be used up to 11 times.

The research program was backed by the Sao Paolo Research Foundation, the group of scientists found that the peels could remove copper and lead from water better than materials like Na-bentonite, AMP-modified silica gel, expanded perlite, and modified peanut husk.

The results obtained showed that Banana peel was 20 times more effective than other substances.

Yet more evidence that many scientists might benefit from getting away from their labs and fancy processes and into the kitchen compost!

There is one insurmountable strike against widespread adoption of this new idea:

Banana peels are a cheap alternative to large purification plants because of their low cost and availability. While tons of it may be required to run a plant, it can be used in much small scale units where the finance for treatment plans is scarce.

Let me interpret that for you: No big money to be made = little interest in development. A slippery slope, indeed.