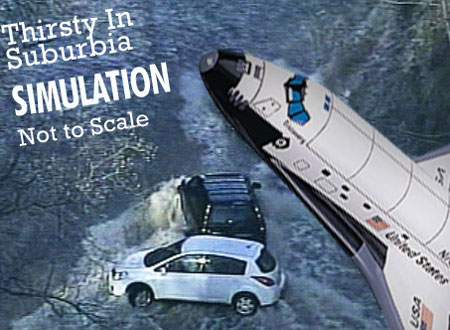 Considering that the Space Shuttle Discovery weighs 4.5 million pounds at lift off and employs 2 solid rocket boosters, 3 main engines and 2 orbital thrusters, it’s insane to imagine that it was held back by a break in a 24-inch water line.

A water pipeline broke near the Kennedy Space Center launch complex on September 8th, closing the facility’s visitor center and delaying a planned “rollover”–the move of space shuttle Discovery from its hanger to the building where it is to be be prepared for its November 1st mission to the International Space Station. 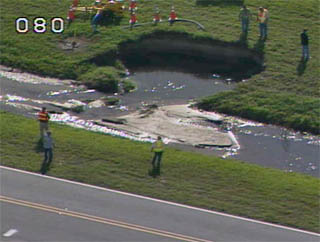 NASA Webcam photos of the water main break via spaceref.com

The gushing pipeline break left the Kennedy Space Center without potable water or working restrooms, so non-essential personnel got the day off while tourists headed to the visitor center were turned away. A quick fix ensued and the Center reopened in the afternoon after water was restored to all locations except for one administrative building. The Visitor Center reopened the following day.

Hope they had a pallet or two of astronaut water around! Why, one can’t even have Tang without water!

So now, you too can enjoy the same inconveniences that the astronauts enjoy! Water main breaks occur, on average, 700 times every day in the US and Canada. (Also, see our CRAPPY INFRASTRUCTURE rss news feed below for “breaking” news around the clock.)

No privacy when taking care of your “private business”