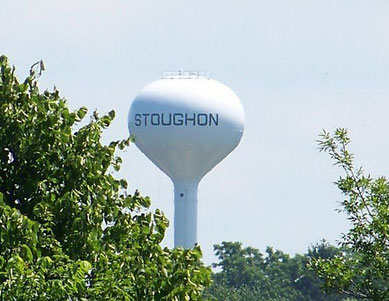 We’ve all been embarrassed by a careless typo now and then, but rarely is the goof the talk of the town. As one commenter on this story noted, this job obviously went to the low bidder!

A painter for the Illinois-based Neumann Company Contractors forgot the second T in Stoughton on the city’s new east side water tower.

A company spokesman says almost everybody in the profession makes a similar error at some point, but not all of them do it with a 6-foot tall letter on a 190 foot tower.

The spokesman says the painter had the correct spelling, but forgot the T when he blocked out the letters. He works right to left, so he starts at the end of the word and works backwards. After he painted in the N and the O he realized he was missing the T.

Neighbor Richard Budden says even little kids know how to spell Stoughton. “(He) told me that they spelled Stoughton wrong. I went out and looked. By God, you’re right. He’s only in third grade. If he can figure it out then the painter should be able to figure it out.”

Neumann Company Contractors says they will have to let the paint dry and then repaint the last three letters. It will not cost the city any extra money.

The spokesman says the painter is actually from Wisconsin and the Illinois company man joked that’s what he gets for hiring a cheesehead.

Under the Hood of my Ugly '80s Toilet

h2o mp3: Something in the Water - The Jealous Girlfriends

Post-Festival Fate of the Metheun Tree

Aqua in Chicago: 82 Stories of Inspiration
Scroll to top