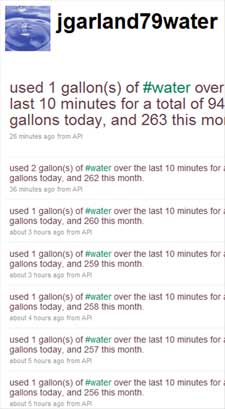 I’m old fashioned, I guess… my method of encouraging conservation around the house involves nag, nag and nag some more. I’ve seen the light though via Jason Garland (jgarland79water on Twitter). His spiffy new water meter keeps careful tabs on water use, then sends out a seemingly never-ending series of tweets about it!

If a high annoyance level will motivate us to change our behavior, this ought to do the trick! Jason’s twitterfeed now boasts nearly 4,500 tweets, every single one of which reminds him of his daily and monthly totals.

Below, see Jason’s You Tube video showing the tweet-happy meter…which looks to me pretty similar to the old-style bill-mailing variety!

According to his You Tube page, his equipment source was http://www.watermeters.com/)

Occupy Water Tower: The Revel's in the Details

What is Lost in Translation: Time

Bottled Water: Straight to the Heart