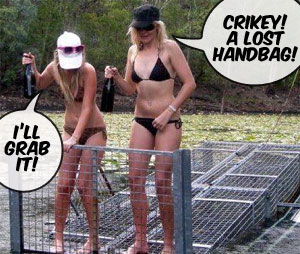 If you really want to  get the party started, how about throwing on a skimpy bikini and cage dancing on a crocodile trap, like these blon…uh, spirited young Australian ladies? Despite ongoing and frequent warnings in the media and from wildlife officials, it seems the lure of croc-infested waters is too strong for for exuberant partiers and sportsmen to resist.

From a November 19 story at www.netnews.com.au,

ANOTHER photo has emerged of more “idiots” risking life and limb by larking about atop a crocodile trap in the Territory.

These bikini-clad ladies were spotted singing in the rain, using champagne bottles as microphones, while standing on a croc trap in a crocodile-infested river in Maningrida.

Their mates were in a fishing boat several metres away taking photos.

The image, taken at the weekend, surfaced yesterday – a day after the Northern Territory News published a picture on the front page of two male tourists tempting fate by doing a similar thing at Jim Jim Falls in Kakadu National Park.

The hooligans were laughing and joking as they posed as cowboys riding atop the trap.

Park ranger and crocodile expert Garry Lindner said the behaviour of the men was absurd.

“Crocs are attracted to the bait in the traps, so it is extremely dangerous to fool around like this,” he said.

Read the rest of the story here, where they have thoughtfully included these witty obervations from readers:

One reader suggested the photo caption should have read: “Dinner is served! Tonight’s menu features two courses of stupid.”

And another browser said: “I don’t know about a croc trap but it certainly works as a moron trap.”

Also worth perusing is the “Croc Bait” photo gallery at ntnews.com.au where you’ll find this hysterical photo series with captions: (All photos by Doron Aviguy) 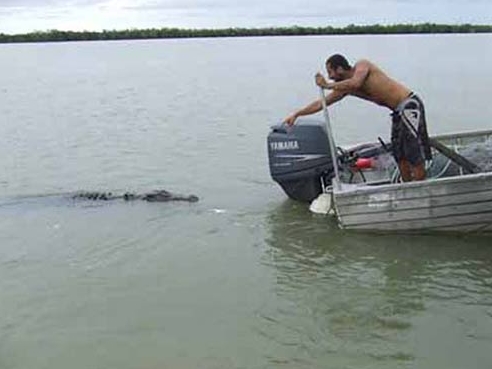 Fisherman Novon Mashiah thinks he is safe from this croc on a Territory river.

But the croc thinks he might not be so safe. 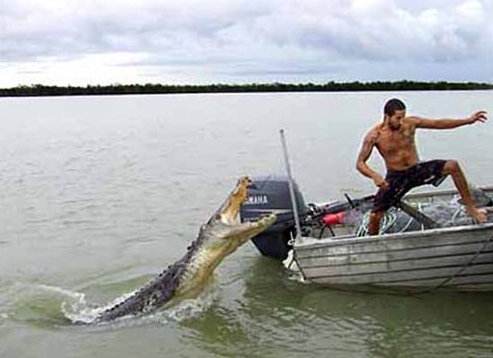 This monster croc came within a metre of making a meal of fisherman Novon Mashiah on a Territory river.

I Wooden Drink This

A. Blackwell was Passed Over, Again!
2 replies

Something from Santa’s Photoshop? Wonderful World of Disney Toilets
Scroll to top