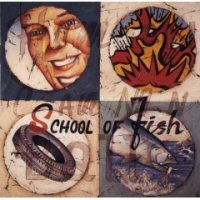 This Boston-based college-rock band School of Fish made a splash with their first 1991 effort but were less successful with their second 1993 album Human Cannonball, from which Drop of Water comes. The band disbanded in 1994. Even sadder–frontman Josh Clayton-Felt then released a solo album in 1996 before succumbing to testicular cancer in 2000 at the age of 32.

It’s too quiet in my head
I’m not dead, I’m alright
And nothing makes much sense
It was immense to sleep tonight

Download Drop of Water – School of Fish
Like it? Support the people who make music – buy this album or track at amazon.com

Se vedete le immagini saranno hai capito? I Feel Good, I Knew That I Would, Now
Scroll to top