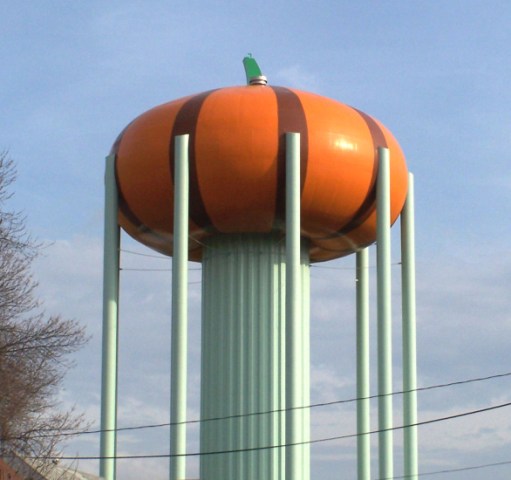 The folks from Circleville, Ohio, sure know how to whip up some soaring enthusiasm for their annual Pumpkin Show, first held in 1903. (While it sounds quaint, it has grown into an extravaganza that attracts 400,000 visitors!)

The water tower, which holds a million gallons, was built in 1976 but it wasn’t until 1997 that it was painted to resemble a giant gourd. (The stem doesn’t really have a function, it was added for authenticity!)

Indoor Pool, Water View, Needs Work
Many Small Choices, One Big Impact
Who Says Turkeys Can't Swim?
Vols Fan Wants to Give Kiffin Some Crap. Literally.
h2o mp3: Drop of Water - School of Fish
Withhold Water from Simpleminded Sod
Best of 2009: Water and Drought Jokes: How Dry is It?
Eschew the Fat: How Gross is This?

Nemo, txt u l8r You Can’t Do your Laundry on Twitter
Scroll to top