I shelled out $2.50 just so I could share this Borba Water with Lychee Fruit with you! The lychee (aka laichi or lichuare) is a fruit tree native to Southern China and is now cultivated throughout parts of Southeast Asia, reaching Hawaii in 1873, Florida in 1883, and California in 1897.

Lychees require seasonal temperature variations with warm, humid summers and cool, dry winters for best for flowering and fruit development. Young lychees can be killed by a light frost, but mature trees have survived temperatures as low as 25° F when fully hardened off. According to the California Rare Fruit Growers, Inc., there are trees in San Diego, California that are over 90 years old with no sign of decline in sight.

And this fruit has some sexy roots! An early Chinese historical reference to lychees was made in the Tang Dynasty, when it was reportedly the favorite fruit of an emperor’s number-one concubine. Since lychees were only grown in southern China, the emperor had the fruit delivered by the imperial messenger service’s fast horses, whose riders would take shifts day and night, like the Pony Express, to get the just-picked lychees to the capital. 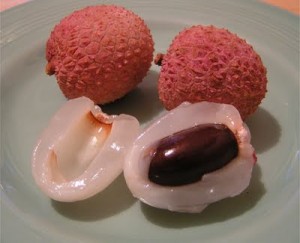 Another interesting story: the “Hanging Green” cultivar is the most famous and rare lychee in existence. For centuries, Hanging Green was an item of tribute to the imperial government of various dynasties until people in Canton revolted during the Qianlong era against the tributes and chopped all but one of the Hanging Green trees. The sole remaining tree still produces fruit each year, and fruits from that tree are now called “Zhengcheng Hanging Green.”

That’s fascinating, but I’m too distracted by Borba’s label to think about lychees, particularly THIS gem:

Can you IMAGINE that?! Right on the other side of my skin lies a supermodel, needing only BORBA water to get out! Suddenly, $2.50 seems wildly reasonable! WHY didn’t someone tell me about this years ago, so that gorgeous me could revel in intoxicating global attention? Thankfully, they’ve included directions but I’m a bit confused…do I have to do the Twist, or would other cool moves be acceptable? Do I sip WHILE dancing, or afterward? When will “Inner Babe” bust out? Is it immediate, kinda like kryptonite? Let me know…

The Perversion of Bottled Water

Lost in the Plastic Forest