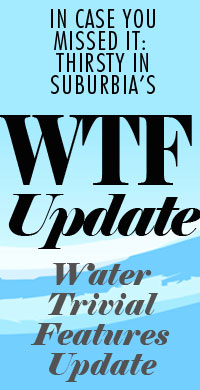 A 5 year old British Columbia boy is recovering after a cougar attacked him on a family hike at Colville National Forest. As his father Mark Impey recounted, he heard his wife and son’s screams, ran to check and

…he saw that a big cat had his son, Simon, by the head and his wife, Dawn, was trying furiously to fend the animal off with a metal water bottle.

“I really think it was a case of being in the wrong place at the wrong time,” Impey said in an interview.

Dawn’s repeated blows with the water bottle finally forced the cougar to retreat into the bush.

WTF footnote: Just try that with some flimsy, disposable bottle. You couldn’t fight off a house cat with your Dasani.

Read the full story at www.chandlerswatch.com

PEE MINUS 5 SECONDS AND COUNTING

In Madison, Wisconsin, photographer Abe Megahed witnessed a similar display: “The shuttle was sporting a massive curved plume. What could it be? Something venting? Reaction Control System thrusters? A massive, record-breaking urine dump?”

It was in fact, his last guess. The shuttle, while docked with the International Space Station, sprayed about 150 pounds of waste water and pee-pee out into space on September 10. Shuttle pilot Kevin Ford was scheduled to carry out a number of “waste water” dumps around the time these observations were noted. Pristine water supplies and condensates were also dumped overboard in preparation for landing on Thursday, Sept. 10th.

WTF footnote: Do the astronauts eat tomatos? If so, someone should research whether this could cause tomatos to grow on the moon.

Read more and see photos of the zero-gravity sewage here at www.jimonlight.com.

Australian police said two teenage brothers reeled in a plastic bag stuffed with $86,000 while fishing for catfish in Tuntable Creek, near the town of Lismore.

The boys spent three weeks deciding on a plan of action before telling their mother and obtaining legal advice on how best to turn over the cash, The Times of London reported.  Mama knows best! From UPI.com,

The mother of the boys, who requested anonymity, said the family did not want to keep the money because it might be “dirty.”

“We just don’t want any trouble,” one of the brothers said. “We were sweet before the money and we’ll be sweet afterwards.”

WTF footnote: An estimated two-thirds of media comments by teen boys include the phrase  “We don’t want any trouble.”

Vittel: It Must Be the Water. And the Budget.

What's a Fountain Without Water?

Many Small Choices, One Big Impact

The New DIY: Dumps Inspire You The Absurdity of Umbrellas
Scroll to top