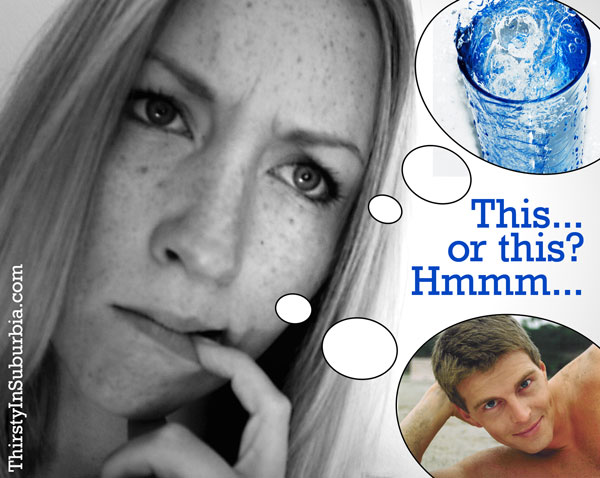 Yet another enlightening finding in the study of curious gender differences! A new Cooking Light poll finds that women rank gettin’ some water more important that gettin’ some! Via www.basilandspice.com,

U.S. WOMEN SURVEYED IN COOKING LIGHT POLL SAY DRINKING THE RECOMMENDED AMOUNT OF WATER IS MORE IMPORTANT THAN HAVING ENOUGH SEX
New York, NY (August 25, 2009) – Drinking the recommended daily amount of water is more important to women than having enough sex, according to a national survey conducted by Cooking Light magazine. When asked what women’s priorities were in terms of their health and well-being, drinking enough water ranked fifth and sex ranked seventh. Over 1,000 women across the country participated in Cooking Light’s “Women’s Wellness Poll” which surveyed their opinions on healthy living, eating and exercise.

In fact, there were six health and wellness activities that finished ahead of sexy number seven in the “Women’s Wellness Poll.”

Sort-of related post:
Behind the Shower Curtain: Steamy Secrets In which Water Pik Corporation researches “What Men and Women Really Think About in the Shower”

Related in a parallel way:
From a report via consumerist.com: most people would rather save $50 a week (57 percent) than drop down to the next lowest clothing size (31 percent) or have more sex (6 percent).

Obligatory study methodology stuff for the skeptics:
This report is based on a blind online study conducted among a randomly selected sample of U.S. women age 25+. The data in this report is based on 1020 competed questionnaires. The maximum margin of error is +/- 3% at the 95% confidence level.

How do you spot 'fake' water?