They say heat can drive man and beast crazy. We’ve got our heat and water worries in this ‘burb, but as of now we don’t have to worry that a steamy hippo might get stuck on our water tower, or that a survivalist pig hops into our pool.

From katv.com, Little Rock, news of a pool party with ham dip! (All actual photos under the close guard of the Associated Press.) 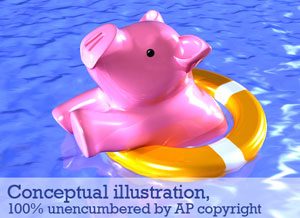 An 800-pound hog that survived on its own for a week after a truck flipped while on its way to a slaughterhouse has surfaced in a swimming pool at a home near the crash site.

LeAnn Baldy, whose house is only yards from Interstate 430, said Monday she noticed her pool was suddenly overflowing and then saw the immersed pig, which was having a drink in the pool.

About 90 hogs were in the trailer when it overturned where I-430 meets I-40, and about 60 survived. Officials said they thought the last of them had been caught.

Baldy says she found a farmer to take in the pig. A spokesman for Odom’s Tennessee Pride says it can’t use the hog in its sausage products because no one knows what the hog had been eating in its week on the lam.

You know we watch out for what’s hot and hip. This covers the best of both worlds! From a story and photo gallery on metro.co.uk, 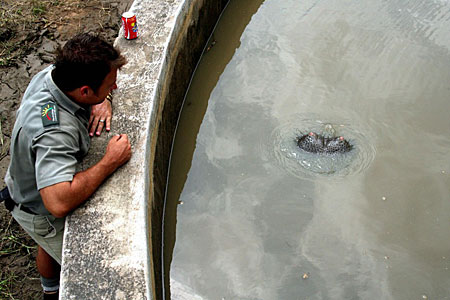 An overheating hippo was so desperate to cool down that he climbed over the side of a 3m (10ft) water tower for a nice long soak.
However, after happily splashing around for a while, the mammal found it could not get out of the pool and was well and truly stuck.
Luckily, a farm worker noticed water spilling over the side of the concrete container and spotted two enormous nostrils poking out of the tank. He immediately rang for help and, within hours, rescuers arrived at the farm in Alkmaar, just outside Nelspruit in South Africa. 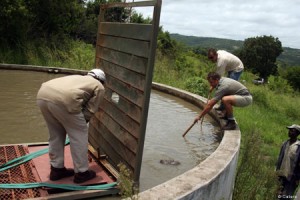 Equipped with a hydraulic crane and a cage, hippo hunter Chris Hobkirk and his team from the Mpumalanga Tourism and Parks Association set to work. In a four-hour operation, they drained the tank and used poles to gently nudge the hippo into the 3m-long (10ft) steel cage before winching it to safety.

Shut your mouth and get your Speedos
1 reply