The Bronx is up and the Battery’s… um, where? From the March 1934 issue of Modern Mechanix, a billion-dollar proposal (in 1934 dollars!) that should have even modern-day developers and speculators indulging in insane profiteering daydreams.

If this plan seems a bit over the top, the article notes, “Engineers uniformly agree that there are very few problems which can successfully defy the determination of civilization to conquer.” Dam right! (At the www.blog.modernmechanix.com, you can read the original 5-page article here.)

PLUG up the Hudson river at both ends of Manhattan . . . divert that body of water into the Harlem river so that it might flow out into the East river and down to the Atlantic ocean . . . pump out the water from the area of the Hudson which has been dammed off … fill in that space . . . ultimately connecting the Island of Manhattan with the mainland of New Jersey . . . and you have the world’s eighth wonder ”the reconstruction of Manhattan!

That is the essence of the plan proposed by Norman Sper, noted publicist and engineering scholar. It is calculated to solve New York City’s traffic and housing problems, which are threatening to devour the city’s civilization like a Frankenstein monster. 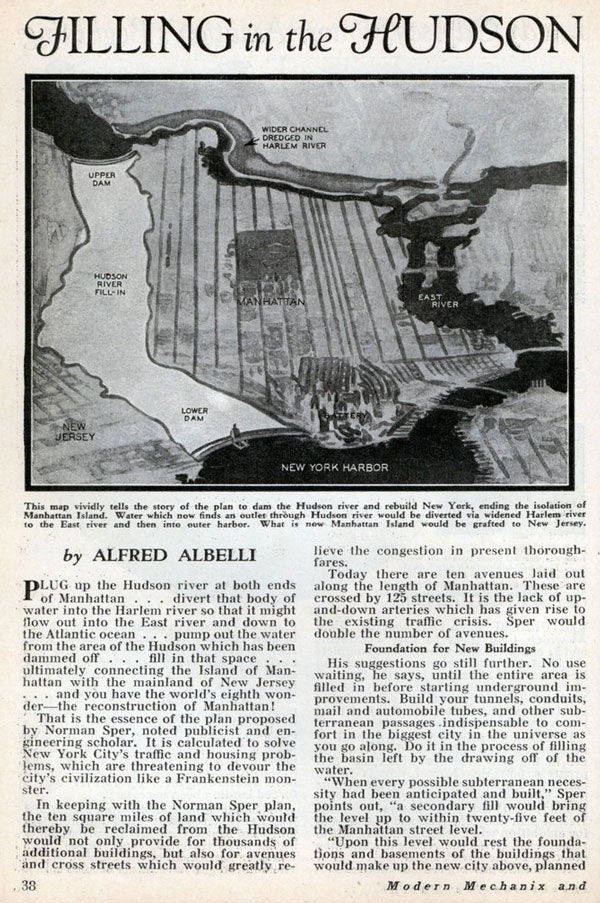 Remember what happened with Tang

Evian, The New Fountain of Youth Judge Us By Results, Not Method
Scroll to top