I am awed by the realm in which we live. Why? Because in our time, in this place, there exists the wonder of an April Fools Day Database, a “catalog of April Fool’s Day hoaxes, pranks, and related events throughout history, categorized by year and theme.” This international cultural treasure is maintained at the also-venerated modern marvel www.museumofhoaxes.com.

I would recommend that every netsurfer worth their salt kill an entire workday browsing this incredible resource. But for now, on this special day, I have gathered those listings relevant to our beloved dihydrogen oxide.

Super Pii Pii Brothers (2008)
ThinkGeek wrote about an unusual new Nintendo Wii game: Super Pii Pii Brothers. It was described as an “Amazing Virtual Pee Experience from Japan.” Prepare yourself by strapping on the included belt harness and jacking in your Wiimote. A series of toilets are presented on screen and the challenge is to tilt your body to control a never-ending stream of pee. Get as much pee in the toilets as you can while spilling as little on the floor as possible.

Google announced a new technology called TiSP that would allow it to provide free in-home wireless broadband service. TiSP stood for “Toilet Internet Service Provider.” Users would connect to the internet via their bathroom’s plumbing system. Installation involved dropping a weighted fiber-optic cable down the toilet and then activating the “patented GFlush™ system” which would send the cable “surfing through the plumbing system to one of the thousands of TiSP Access Nodes.”

Google promised that it would provide a higher-performance version of the service for businesses which would include “24-hour, on-site technical support in the event of backup problems, brownouts and data wipes.”

Overweight Canal-living Ducks (2004)
British Waterways released a study claiming that a study conducted by Dr. Olaf Priol had found that ducks who lived on canals weighed, on average, a pound more than ducks who lived on rivers. The slow-moving canal water apparently provided the ducks with less opportunity for exercise, and so they gained weight. The study had an embargo date of April 1st (meaning that the media was not supposed to make it public until then), but the BBC, believing the study to be real, broke the embargo and discussed it earlier.

Catfish Licking (2000-2005)
This article discussed how Gulf Coast teenagers had been licking catfish in the hope that it would make them high. A follow-up article revealed the source of this strange behavior–an April Fool’s Day joke published in Sport Fishing magazine five years prior.

OK, listen up catfish lickers. You’ve been punked. There’s no hallucinogen in the slime.
A Florida magazine editor said he made the story up five years ago for an annual April Fool’s special – and somehow it just kept on going…

He [Doug Olander, editor-in-chief of Sport Fishing magazine] claimed the catfish goop was popular among college kids, who called themselves “slimers” and paid as much as $200 for a fresh catch. The slime was supposed to produce a “whisker-lickin’ good” trip that would give users the sensation of being under water. He attributed the information to University of Florida scientist Dr. Benjamin Joon.
As in “Benny & Joon,” the romantic comedy with Johnny Depp.

Solar Complexus Americanus (1995)
The Glasgow Herald described the recent arrival in Britain of a new energy-saving miracle: heat-generating plants. These plants, known by the scientific name Solar Complexus Americanus, were imports from Venezuela. One plant alone, fed by nothing more than three pints of water a day, generated as much heat as a 2kw electric fire. A few of these horticultural wonders placed around a house could entirely eliminate the need for a central-heating system, and when submerged in water, the plants created a constant supply of hot water. The Scandinavian botanist responsible for discovering these hot-air producers was Professor Olaf Lipro.

Submarines Secretly Patrol Thames (1989)
The Daily Mail reported that government submarines had been secretly patrolling the Thames every night for the past six months. Apparently the Royal Navy had replaced the Thames Water staff with its own personnel in order to maintain the secrecy of the patrols. A picture of a submarine photographed in Henley accompanied the article.

Hong Kong Powdered Water (1982)
The South China Morning Post announced that a solution to Hong Kong’s water shortage was at hand. Scientists, it said, had found a way to drain the clouds surrounding the island’s peak of their water by electrifying them via antennae erected on the peak. The paper warned that this might have a negative impact on surrounding property values, but the government had approved the project nevetheless. Furthermore, more clouds could be attracted to the region by means of a weather satellite positioned over India. And finally, as a back-up, packets of powdered water imported from China would be distributed to all the residents of Hong Kong. A single pint of water added to this powdered water would magically transform into ten pints of drinkable water. Hong Kong’s radio shows were flooded with calls all day from people eager to discuss these solutions to the water shortage. Many of the calls were very supportive of the plans, but one woman pointed out that the pumps needed to supply powdered water would be too complicated and expensive.

The Michigan Shark Experiment (1981)
The Herald-News in Roscommon, Michigan reported that 3 lakes in northern Michigan had been selected to host “an in-depth study into the breeding and habits of several species of fresh-water sharks.“ Two thousand sharks were to be released into the lakes including blue sharks, hammerheads, and a few great whites. The experiment was designed to determine whether the sharks could survive in the cold climate of Michigan, and apparently the federal government was spending $1.3 million to determine this. A representative from the National Biological Foundation was quoted as saying that there would probably be a noticeable decline in the populations of other fish in the lake because “the sharks will eat about 20 pounds of fish each per day, more as they get older.“ County officials were said to have protested the experiment, afraid of the hazard it would pose to fishermen and swimmers, but their complaints had been ignored by the federal government. Furthermore, fishermen had been forbidden from catching the sharks. The report concluded by again quoting the National Biological Foundation representative, who said that “We can’t be responsible for people if they are attacked. Besides, anyone foolish enough to believe all this deserves to be eaten.“ 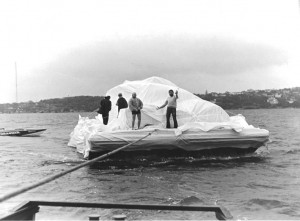 The Sydney Iceberg (1978)
A barge appeared in Sydney Harbor towing a giant iceberg. Sydneysiders were expecting it. Dick Smith, a local adventurer and millionaire businessman (owner of Dick Smith’s Foods), had been loudly promoting his scheme to tow an iceberg from Antarctica for quite some time. Now he had apparently succeeded. He said that he was going to carve the berg into small ice cubes, which he would sell to the public for ten cents each. These well-traveled cubes, fresh from the pure waters of Antarctica, were promised to improve the flavor of any drink they cooled. Slowly the iceberg made its way into the harbor. Local radio stations provided excited blow-by-blow coverage of the scene. Only when the berg was well into the harbor was its secret revealed. It started to rain, and the firefighting foam and shaving cream that the berg was really made of washed away, uncovering the white plastic sheets beneath. (Photo #1 from www.no-big-bang.com)

Water to be shut off (1965)
Printed leaflets were distributed throughout Stockholm informing people that the water company was soon going to cut off the water. Housewives were urged to fill the bathtub and whatever containers they had with water while “certain adjustments” were made to the water system. The water company, after receiving hundreds of calls, eventually issued an official denial, blaming the leaflets on an unknown prankster. [Appleton Post-Crescent, Apr 1, 1965.]

The Light of San Antonio, Texas published a story about a huge army missile that had accidentally escaped from Kelly Air Force Base during testing, “screamed over San Antonio,” and crashed into a water tank near Trinity University. An accompanying picture showed the missile embedded in the ground as water from the tank poured over it. An Airforce Colonel was quoted as saying, “We’re spending a great deal of money and much of this nation’s international diplomacy is based on the armed strength this and other units like it achieve. So I hope you’ll understand why I have no more time for this damned April Fool gag.” 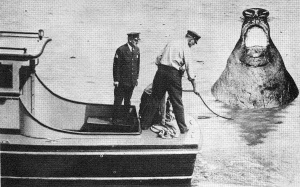 Philadelphia Sea Monster (1936)
The Philadelphia Record ran a picture titled, “Deep Sea Monster Visits Philadelphia.” Although modern viewers have little difficulty in spotting the picture as a fake, it fooled many of the Record’s readers.

Thomas Edison Turns Water into Wine (1878)
After Thomas Edison invented the phonograph in 1877, Americans firmly believed that there were no limits to his genius. Therefore, when the New York Graphic announced in 1878 that Edison had invented a machine that could transform soil directly into cereal and water directly into wine, thereby ending the problem of world hunger, it found no shortage of willing believers.
Newspapers throughout America copied the article, heaping lavish praise on Edison. The conservative Buffalo Commercial Advertiser was particularly effusive in its praise, waxing eloquent about Edison’s brilliance in a long editorial. The Graphic took the liberty of reprinting the Advertiser‘s editorial in full, placing above it a simple, two-word headline: “They Bite!”

h2o mp3: Its All About the Water - Jimmy Buffett

March 31st: The Annual Day of Readiness Smoke on the Water
Scroll to top