Holy Bat-Stunt, this was a great day for the power-quad of water towers, middle-aged women, outlet shopping and Canada! From Rick Vanderline for barrieadvance.com in central Ontario, Canada, 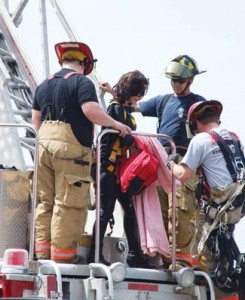 A woman dressed as Bat Girl climbed to the top of the water tower at the Cookstown Outlet Mall jut before noon Saturday and unfurled a banner in the name of Fathers for Justice.

Firefighters from Bradford West Gwillimbury used an aerial ladder truck to climb to an upper platform of the tower to bring the unidentified woman down. Before the ladder was raised a lone firefighter climbed up the tower’s metal and spoke with the woman for about 10 minutes.

A large banner the woman hung from the side of the tower, which overlooks Highway 400, proclaimed the cause of Fathers for Justice, a group that has criticized Ontario’s Family Court system as being unfair to divorced fathers. The banner read: Parental Alienation Awareness; Love is For Everyone. The 49-year-old Alliston woman  is now facing charges of mischief as a result of the stunt.

Over at thebarrieexaminer.com, they’ve got some some exciting first-person perspective on the story:

Paulette MacDonald scaled the tower, outside of the Cookstown Outlet Mall, before 5 a.m. Saturday, but went unnoticed until 11:30 a.m. The 49-year-old Alliston woman said she had to call to mall patrons below to get the attention of mall security.

“When he looked up at me perched up in the tower his chin hit the ground,” MacDonald said, adding that police and firefighters arrived shortly afterwards. “It was the first time that I’d done something like that. I was very scared, but I was more scared for what would happen to the future of our children.”

The Parental Alienation Canada Blog helps us get a sense of scale with some photos of the scene of the “crime” along with a remarkably prompt same-day press release. 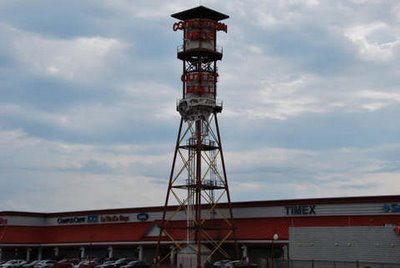 Snapped! School Bottled Beverage Brouhaha
Speaking the Universal Language of Cute
The Visual Water Dictionary: Slurry
A water tower you can climb
If I Could Place Ads on a Bottle
The Great Pumpkin, Water Storage Version
Tower of Power #2
Dam That Nuisance Hudson River!